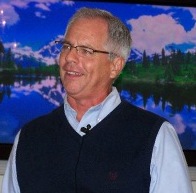 Steve Schantz, pastor of GCI congregations in Orlando and Melbourne, Florida, grew up in the rural dairy farming community of Lowville, New York. “We enjoyed fishing and gardening in the spring, swimming in the summer, football in the fall, and ice-skating, sledding and snowmobiling in the winter. I took up tennis my senior year in high school and continued with it at Ambassador College in Big Sandy, Texas.”

At age 12, a large boil on his leg got Steve interested in the church his parents had been reading about—the Worldwide Church of God. “As the boil grew and became more painful, a red line of infection traveled up my leg. My mother had a year of nursing school before marriage and recognized the signs of blood poisoning.” Steve spent a lot of time praying and his parents asked for an anointed cloth to be sent. The boil burst and the healing began. “The red line disappeared and finally so did the boil without a trace. I knew that God had healed me and I was thankful! Although the habit of daily prayer would not be part of my life for several more years, I knew that God was with me and the incident was the beginning of a personal relationship with him.”

Because they lived far from church, Steve and his family were not able to attend often. “We spent most Saturdays that first year at home until a congregation was started in Syracuse, New York. When we could not be there on a weekend it was difficult for me. I would beg to attend events and social functions even if they were hours from home. I looked for ways to tie our faith and practice (as different as it was from that of my friends) to the rest of my life. The first fall festival we attended was in Mt. Pocono, Pennsylvania in 1967 under one of the ‘big tents.’ Our family was one of many who brought tent and camping equipment that first year and ‘roughed’ it at the Mt. Pocono camp grounds.”

Steve developed a passion to understand what it means to be “the people of God.” “Even when I struggled in later teen years with my sinful nature, it was a desire to be in fellowship with ‘the church’ that motivated me to pursue behaviors and interests that enabled this special spiritual/social interaction. I think without having a name for it all those years ago, what I was seeking and still love is koinonia.”

By age 16 Steve had fallen in love with music. “My love of music and playing saxophone in the high school band found an outlet at church dances, weddings, and festival entertainment shows. During my junior year in high school we traveled to St. Petersburg for the festival and attended an evening entertainment show put on by the Ambassador College, Big Sandy band and New World Singers under the direction of Gary Briggs. Listening to African American saxophonist Johnny Griffith perform a really cool jazz riff on tenor sax during one of the band’s more upbeat numbers had me hooked! I knew I wanted to go to Ambassador College and perform with that band! But my desire and reality didn’t coincide until the spring semester of 1974 after I finished a year as a music major at Onondaga Community College in Syracuse.”

Steve met Carol Allen at Ambassador College. “We dated in our junior year while serving in student government, leading in speech club and participating in the New World Singers (I played saxophone and she sang). I proposed to her in 1977, shortly before we graduated. We were married in July—this year we celebrate our 36th anniversary!”

The denomination did not hire any graduates into full-time ministry in 1977, so Steve and Carol sent out several letters of inquiry to WCG pastors in the southeast. “I was looking for employment and opportunity to serve in a local church. I heard back from Mel Dahlgren in southeast Kentucky, who was pastoring two rapidly growing congregations (London and Somerset) and had the potential for a third congregation without any ministerial help. Carol and I served congregations in the Appalachian region of the US for the next 11 years. Our son Benjamin was born in Lexington, Kentucky in 1982 and our daughter Brianna was born in Fairmont, West Virginia in 1984.”

At the same time Steve was searching for a church to serve, he was looking for employment. “I was hired in May 1977 as Personnel Director for Bell/Whitley, an agency overseeing programs for underdeveloped communities.” Steve was then ordained by Mel Dahlgren in 1978, and in 1979 hired into full time ministry as assistant pastor in Middlesboro, Kentucky. Since then, Steve has pastored in Clarksburg, West Virginia; Ft. Myers, Sarasota and Port Richie, Florida; and now in the Orlando and Melbourne, Florida.

When asked what he enjoys most about being a pastor, Steve said, “Everything (except filling out reports!): speaking, praying, fellowshipping, studying and equipping. If pressed for one thing in particular, I’d say theology shared in everyday settings.” Along that line, Steve mentioned that what he appreciates most about being part of GCI is, “the freedom to participate in what our triune God is doing in the world and the encouraging support we receive through education and equipping conferences that help us further our ministry skills.”

When asked what he would like others to know about him that we may not already know, Steve said this: “While at the fall festival in the Poconos during my sophomore year in high school, I completed a biology class assignment by gathering leaves and berries of trees unique to Eastern Pennsylvania. The teacher awarded me an A++. Now that I am older, I still enjoy the process of finishing a project. This probably comes with the turf of pastoral ministry, where your whole life is spent aiming for ‘in process’ goals. As a result, you ache to do something with a sense of completion. So I enjoy projects around the house—tiling, wainscoting and painting. I also enjoy surf fishing along the Atlantic coast (especially when the Blues are running!).”

Steve’s passion is to “learn more about the love of God and how to discover it in the ups and downs of everyday life.” He loves to share this passion when officiating at funerals. “I treasure the experience of naming and sharing the most powerful aspects of each person’s relational sphere of influence in ways that bring glory to God and draw us closer to him through his Son and by the Spirit.”

One thought on “Steve Schantz”