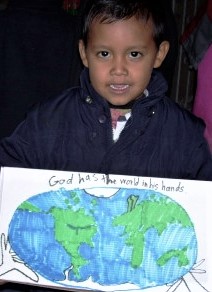 In Acts 1:8, Jesus promised, “But you will receive power when the Holy Spirit has come upon you, and you will be my witnesses in Jerusalem and in all Judea and Samaria, and to the end of the earth.”

Several days later at Pentecost, the Holy Spirit dwelt among the believers, and they began to speak in different languages.

Now there were dwelling in Jerusalem Jews, devout men from every nation under heaven. And at this sound the multitude came together, and they were bewildered, because each one was hearing them speak in his own language. And they were amazed and astonished, saying, “Are not all these who are speaking Galileans? And how is it that we hear, each of us in his own native language?” (Acts 2:5-8 NASB)

Some witnesses to the event ridiculed the disciples. But many were amazed and perplexed by this unprecedented occurrence, and they asked this very important question, “What does this mean?” (2:12).

What does this mean? That miracles are signs pointing to Jesus. The miracle at Pentecost pointed to Jesus Christ and his redemptive work for humanity. The passage says that as the disciples spoke in different languages, they proclaimed the mighty works of God (2:11).

What does this mean? That God is faithful to fulfill his promise to bless the nations through Abraham’s seed. The spread of the gospel across the known world is attributed to this event by many scholars. Visiting Jews who became believers at Pentecost would later travel home, even to regions outside Jewish territory. The gospel message would begin to reach the Gentiles.

What does this mean? That salvation is not limited to a specific race but is for all humanity. The love of God crosses geographical, racial, generational, and cultural borders. In GCI, we see a glimpse of that—we are one family across different countries, with different languages and cultures, but we are partakers of the same salvation through Jesus. In this, we see the heart of God for all people.

Prayer
Thank you, God, for including all humanity in your work of salvation. Give us the clarity and empowerment so that we can participate in Jesus’ ministry, in and through the church, for the proclamation of the gospel. Amen.

2 thoughts on “Devotional—What Does This Mean?”