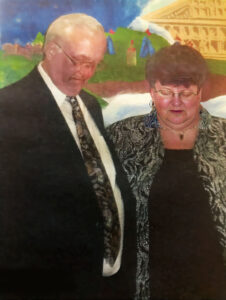 Join us in honoring David Beckner, who retired in April after 15 years as a part-time GCI employee. David served as the pastor of GC Snellville, GA.

A retirement celebration will be held Saturday, July 30 at Living Hope Christian Fellowship in Atlanta, GA. If you would like to attend, please email Phil Doele for more information. phil.doele@gci.org.

Congratulations, David and Gayle! We are very grateful to you both for your many years of faithful service.

We wanted you to hear from David, in his own words.

I am married to the greatest female on earth, Gayle Grimes Beckner. We were married on April 1, 1984—thirty-eight years of a wonderful relationship.

I have been a member of GCI since 1973, baptized in Kingsport, TN, the same year. I was always involved in the activities of the church—everything from Spokesman Club, to ushering, to teaching children’s classes. The thought of ever doing more was never a serious consideration for me until I was ordained a deacon by Earl Williams in 1991.

I became an elder in 1999 and began giving sermons at that time. Public speaking had never been easy for me, but the years in Spokesman Club certainly helped. This ordination put me closer to becoming a pastor, although the possibility had not taken root. When our current pastor stepped down, I believed the Home Office would find someone to take his place.

In 2005, our pastor Howard Shadoan invited Gayle and me to lunch. You guessed it! He asked me to consider my calling and proposed that he mentor me for the next two years until his retirement. For some reason, I immediately said yes without even telling him to give me time to pray and think about it. Maybe I was more ready than I realized—God’s timing is always perfect.

The thing I enjoyed most about pastoring was preaching directly from God’s word. I would have never imagined this years ago. I also enjoyed interacting with people in small groups.

My main concern was meeting the needs of people in my church. I worried whether I was really fulfilling that role. I lost many a night’s sleep thinking about this. Eventually, I reached a point where I had to acknowledge that I was limiting God’s role in people’s life in my ministry. God deals with people effectively whether we as pastors do or not. We need to do our part, but God will do his work despite of what we as pastors do or think. When a pastor realizes this, a lot can be taken off his back and mind.

I have deeply appreciated and enjoyed my time in GCI and will forever treasure the relationships I have developed over the years.

In Him,
David Beckner