Congratulations to Bob and Ruth Miller, who are thrilled to announce the arrival of their first grandchild! Jackson Miller Dewey was born on April 27, weighing 9 lb., 6 oz. The proud parents are Laurie and Mike Dewey, who live in Germantown, Maryland.

ORM Director Curtis May expressed his appreciation for the prayers about the May 5 promotion in Dallas of the upcoming August 7-8 Reconciliation Outreach Conference there. His interview with talk show host Hank Hoaldridge, which was arranged by GCI Pastor Tom Pickett, went very well, and Curtis was guest speaker at the local Ministerial Alliance luncheon, which included pastors, police chiefs and other guests. Several expressed renewed support for the conference and the need to bring churches and communities together. 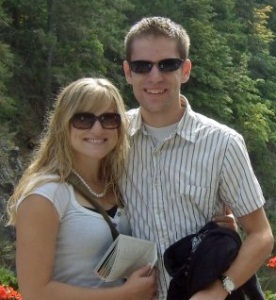 Skyeler Lewkowicz graduated from Northwest Christian University in 2007 with a degree in pastoral ministry. He and Tracy were married in August that year after returning from a mission trip to Mozambique. During his senior year Skyeler completed a short-term pastoral intern program under Tim Sitterley, pastor of our GCI congregation in Eugene, Oregon. After graduation, Skyeler served in various ministries both in Eugene and in North Carolina. Late in 2009, he contacted Tim Sitterley to inquire about a possible future in GCI. Early this year Tracy and Skyeler returned to Eugene, and Skyeler applied for an 18-month pastoral intern position while concurrently working on a second university degree. Tracy is completing her master’s degree in education.

Jeff Snyder, pastor of the Savanna, Georgia, congregation, and Cecil Pulley, pastor of the Bermuda congregation, traveled to Haiti with me last weekend. We were sobered by the magnitude of the challenge faced by the people of Haiti and, at the same time, inspired by the never-say-die spirit of the Haitian people. Life just goes on at a frenetic pace in the midst of the rubble and devastation. 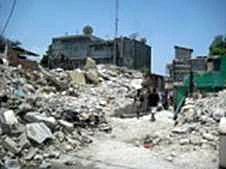 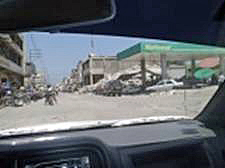 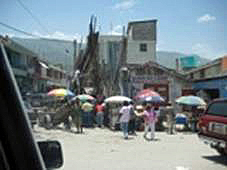 We were impressed to see the work done by our members to get the church-sponsored school re-opened by mid April, just three months after the earthquake. Pastor Joseph Franklin sends his thanks to all those who have supported our Haitian brothers and sisters in prayer and with their generous donations. He credits that support with helping them re-open the school as soon as they did. He says that the five-month period ending in September will be a free ministry to the community as part of the church’s contribution to what the government calls “de-traumatization.” During this time the focus will be on giving the children a safe place where they can socialize, receive encouragement and a free meal while their parents are free to begin putting their lives back together. At present some 23 children are enrolled and are being taught by three trained teachers who have been employed by the church. It is easy to imagine the benefit to these three women and their families to be back at work at this time. We got to meet the kids on Monday morning and they are a lively group. Fist bumps became World Wrestling Federation-type smack downs! 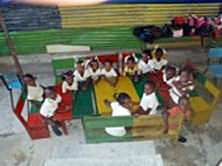 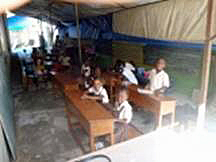 We stayed with the 15 members and relatives who temporarily reside on the church premises. Life for them is extremely difficult as they face daily power cuts, water lock-offs and a leaky roof. The church building was severely damaged, and with the shortage of building supplies, they have only been able to put up temporary walls of plywood. Still, at least three families and two single men have a safe place to live while they recover from the earthquake. It was an inspiration to see these families working together to get through this extremely difficult time. It was also humbling to be served a four-course meal the night we arrived.

While we were there, the members continued their re-building and we were able to join them. We were also able to take in blue tarpaulins, which we helped install in an area used for classrooms. We also demolished two shaky sections of wall on the upper level of the school and Jeff used his building expertise to run electrical wiring into the kitchen and meeting hall. 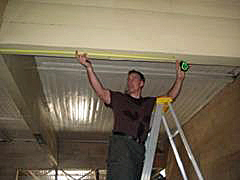 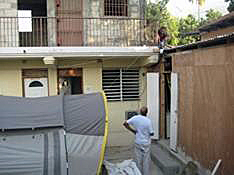 On Sunday, members from distant parts of the country traveled in for services. Andre Naval led the worship and Cecil gave the sermon, with Jeff officiating at the communion service. We also had a period of interaction during which members gave testimonies of new insights they gained into who our God is from what they experienced as he protected them during the earthquake. It was truly inspiring to hear people describe, in detail, their sense of the real presence of our living Lord. Their accounts made me think of Paul’s description of his own experience with God during a time of personal danger: “We were under great pressure, far beyond our ability to endure, so that we despaired even of life. Indeed, in our hearts we felt the sentence of death. But this happened that we might not rely on ourselves but on God, who raises the dead” (2 Corinthians 1:8-9 NIV).

It was a graphic reminder of something we all know, that our knowledge of doctrines (as Paul reflected, God raised Jesus from the dead) becomes intensely personal when that same God meets us in the middle of our own lived experiences. 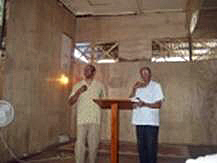 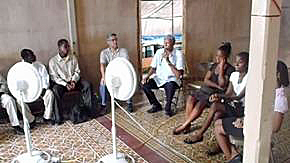 Members also discussed plans to re-open the school with a full academic program in September. By a show of hands they indicated their commitment to support the school to ensure it remains a central part of their missional engagement with the surrounding community. Over the years many have been impressed by the impact of this small group of fewer than 20 persons through the school they have raised up. They, in turn, repeatedly sent thanks to all who have supported them and helped make their dream become a reality. God truly specializes in blessing the efforts of those who come together in his name in response to his redemptive claim on their lives.

In many ways, the most striking aspect of this visit for me was the realization that our Haitian brothers and sisters draw strength from the solidarity they sense coming towards them from our worldwide church family. It is as if members around the world are a “distant presence” in their daily lives. They repeatedly asked us to pass on their thanks and stated that they take comfort from knowing that people are praying for them. I found myself wondering whether I was experiencing some aspect of the “oneness in Christ” Jesus described in John 14:19-20 and John 17: 20-26.

Please pray for healing for Steve Guice (son of GCI Board member Frank Guice and his wife Cora), who fell five feet from a truck onto a concrete floor. Steve suffered eight cracked ribs, a partially collapsed and bruised lung, facial fracture with severely swollen right eye, and a slight spine fracture, which is stable. No surgery is required at this time for any of his injuries, but the prognosis is that he will have to be off work approximately 4 to 8 weeks. He is at the Arroyo Colorado Medical Center. The Guices appreciate your prayers for him as he goes through the healing process.

John Newsom, Jr., a long-time church member and father of pastor John Newsom, associate Pastor of Manhattan Community Church and New Life in Christ, Queens, NY, passed away early Friday morning. His funeral will be Thursday, May 20 at 10:30 a.m. with a wake at 10:00 am. The location will be:

The family said that flowers are not necessary, but cards can be sent to: