We arrived on a Tuesday in Windhoek, capital of Namibia, where we spent a day and a half preparing our vehicle and getting supplies ready for our trip, including purchasing youth and adult Bibles from the Bible Society of Namibia. On Wednesday we drove to Sesriem where we visited the world-famous Sossusvlei sand dunes (pictured below). 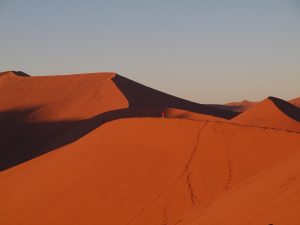 On Thursday we visited the coastal towns of Walvis Bay and Swakopmund before staying overnight under the spectacular rock formations at Spitzkoppe. We then spent four days in Etosha National Park, experiencing its incredible diversity and density of animals, including giraffes, wildebeest, rhinoceros, lions, elephants, ostriches and many otherbird varieties.

The following Wednesday we drove through the countryside to the Zambezi Region. Namibia is mostly desert and arid land, with poor soil in most areas. There has been a two-year-long drought in most of the country. The population density in Namibia is the lowest in Africa, with small rural villages and occasional towns spread sparsely over the country. There is more population in the north than the south, and we started to see many more villages at this stage, including many schools. Namibia has one of the highest rates of literacy in Africa, with compulsory primary school education. 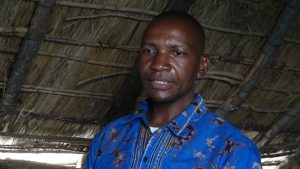 We spent Thursday exploring the Divundu-Okavango area before another long drive to Katima Mulilo on Friday where we met up with Pastor Lascan Sikosi (pictured above). We then visited his church building, which had been constructed with help from GCI-Canada. Together with Lascan we drove to Singalamwe where our members enthusiastically welcomed us with singing and dancing. As shown in the picture below, Bibles were presented to the members who could read English or are in the process of learning the language. 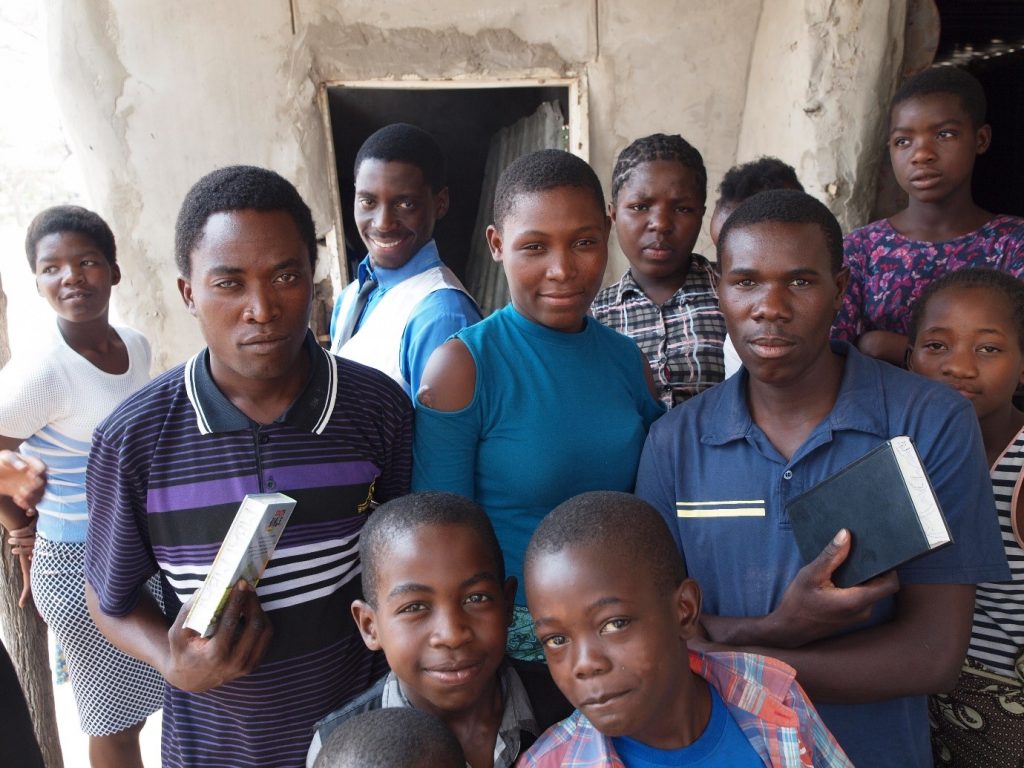 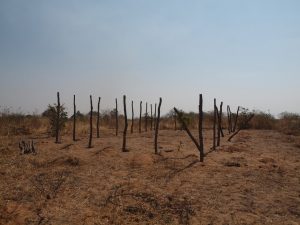 We then visited a neighboring village where the basic beginnings of a new church building were inspected (see picture above). GCI-Tasmania congregations have raised funds for roof and structural materials to enable the building’s completion. The congregation there is growing and their existing church building is too small. The new building will have a metal roof and a more central location making it easier for members to access.

We then returned to Katima Mulilo where we camped overlooking the Zambezi River. We joined the Katima congregation for worship that evening, again receiving a warm welcome. I was invited to give a message, and spoke on 1 John 4:16, and the assurance that God loves us as his children, and how he wants us to be confident in and trust in his faithful, unconditional and never-ending love. There are a number of historical and current religious influences in the area that push a message of works including Sabbath-observance and other religious rules that must be kept to be acceptable to God. As at Singalamwe, the singing was joy-filled and inspiring with beautiful African harmonies, movement and dance. Jan and Lascan presented more Bibles and distributed some of the clothing that the Adelaide, South Australia church had funded.

We had hoped to meet South African Mission Developer Tim McGuire in nearby Botswana early the following week, but his vehicle broke down when returning from church meetings in Lusaka, Zambia and he was unable to join us. Thankfully, we caught up with him a week later in Johannesburg. 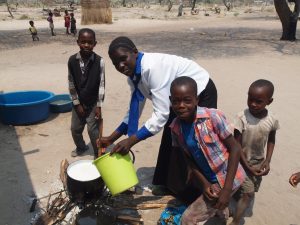 The following Friday we joined members in the region meeting in Katima for a two-day training conference. Topics included GCI history, Trinitarian theology, Christian leadership and pastoring, God’s faithfulness, the role and value of marriage, stewardship, and preaching. The training was interspersed with worship and meals consisted mostly of maize powder mixed with water, cooked in a large pot over an outdoor fire (see picture above). On Sunday, most of the members joined in the baptism of ten adults and teens in a ceremony held on the banks of the Zambezi River (see picture below). The distant sound of hippos, along with the joyful singing of members on shore provided accompaniment. 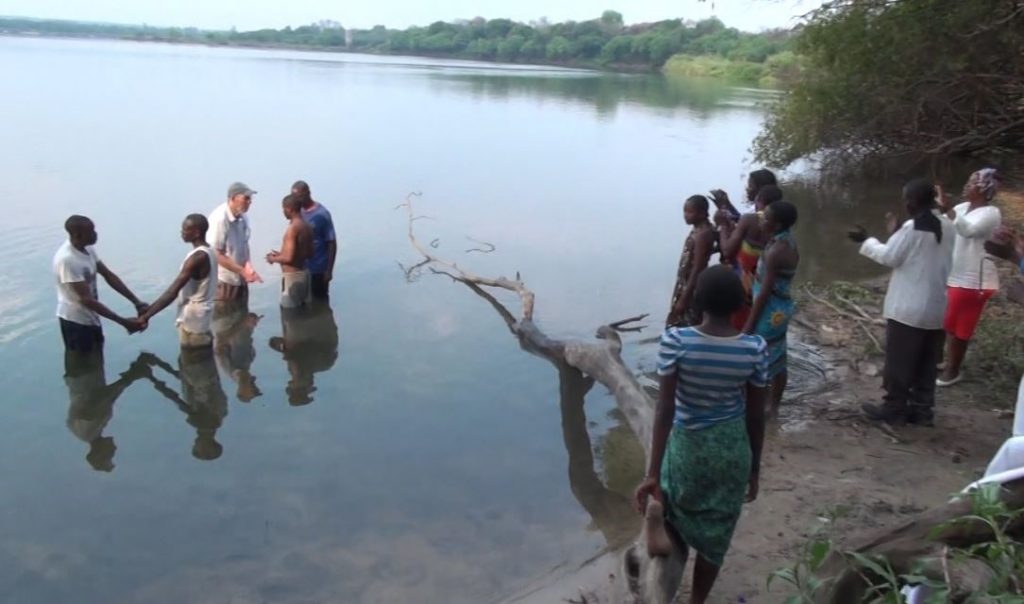 Upon arriving back at the church building, a massive thunderstorm let loose—the first real rain in almost two years. The church building weathered the storm but many local houses (constructed mostly of mud) did not fare as well. After about an hour, we were able to conclude the weekend event with singing and fond farewells (see pictures of the Katima Mulilo congregation with Phil below). 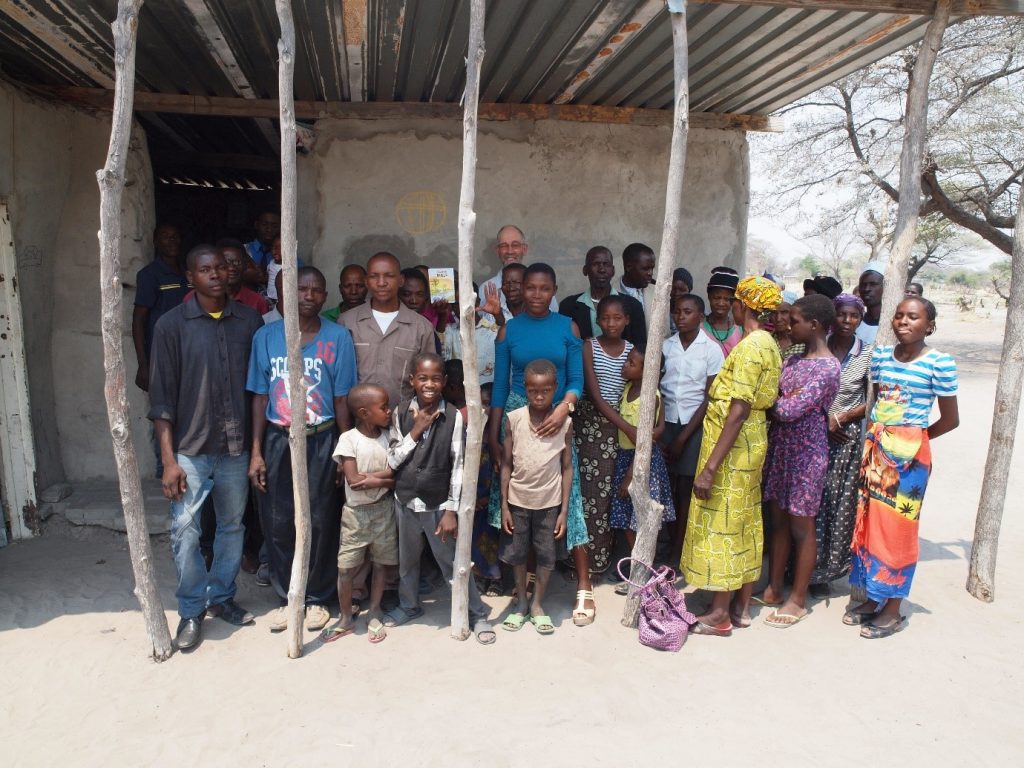 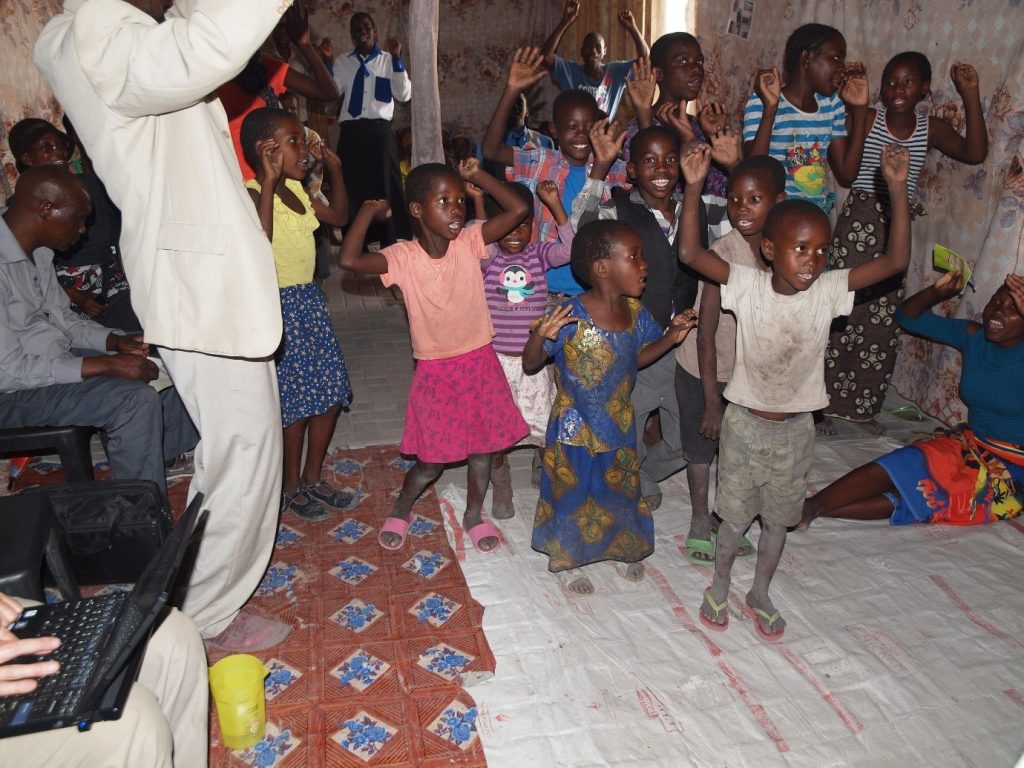 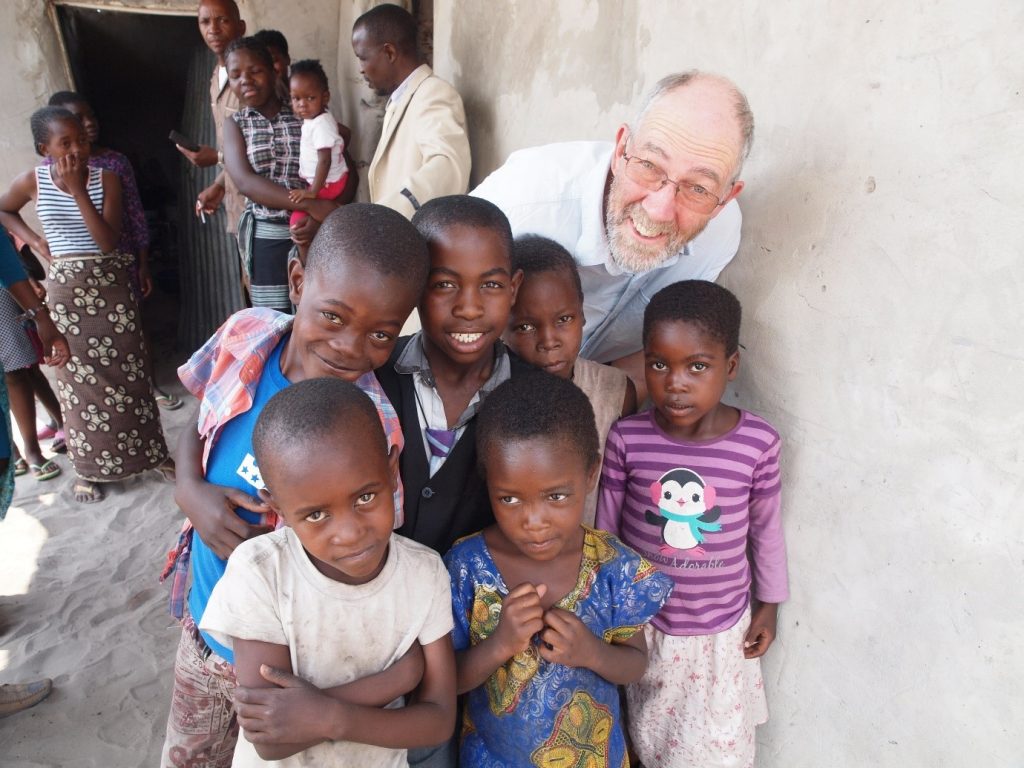 Monday was our last full day in Namibia, and we spent much of it with Pastor Lascan discussing the weekend training, and ways we could be of help in the future. We found and purchased a new drum for the congregation and contributed funds towards other church needs. Lascan’s old phone needed replacing, and he didn’t have a computer, so we gave him a spare phone we had as well as a small notebook PC. He is currently trying to obtain better internet service.

Lascan is not employed by the church, and the local members have very little money to contribute. He receives a small stipend from the South African office. He often does contract work for the local government, and is hoping to pick up more work soon. He has worked enthusiastically and faithfully in Katima Mulilo where he lives to build the local congregation that was in disarray when the former pastor moved back to Germany. He has worked tirelessly and patiently to build relationships with people in surrounding communities.

Lascan enacts Bible stories for children in the local schools, and teaches them about Jesus and the gospel, as well as conducting evangelistic meetings in local villages. There are now five GCI congregations in the area, including a small one attended by San (Bushmen) people. He has capable and supportive help from leaders he has raised up in those churches. He has a small motorcycle provided by GCI South Africa, and also uses local transport to get around the region.

Lascan has received some training from the church in the past and is interested in taking GCI’s ACCM classes online. He is in regular contact with Tim Maguire who visits regularly. Lascan’s vision and prayerful hope is to move to the capital, Windhoek, and raise up a congregation there, and from there conduct mission work in other areas of Namibia. He and the members pray constantly for the work of the gospel in their nation, as well as for their GCI brothers and sisters around the world. They made it clear to us how much they value being part of GCI, and appreciate the friendship and support they receive from Tim Maguire and the church in South Africa and elsewhere.

One thought on “Visit to Namibia”