As noted in the report below from GCI mission developer Rod Matthews, last year GCI more than doubled its number of churches and members in the Southeast Asia nation of Myanmar (formerly Burma). This was the result of a group of congregations led by Pastor Chan Thleng seeking and being granted membership in our fellowship.

Chan Thleng had previously met with Wong Mein Kong, Southeast Asia Senior Pastor, on his several visits to Myanmar in response to this request to become part of GCI. Chan Thleng was the leading pastor in a group of congregations mostly based in the Chin Hills area in northwest Myanmar around the town of Matupi. He had also established a home congregation in Hmawbi, near the capital of Yangon in the south of the country. Chan Thleng had seen our website, read our literature and was delighted with the refreshing and genuinely good news revealed by and in Jesus Christ.

During past meetings, they had discussed our theology and pastoral approach, and as he came to know us better, his enthusiasm about bringing this group into our fellowship grew. However, he had to have some lengthy discussions with the pastors of his northern congregations to ensure that they all understood and agreed with the theology and the proposal to become GCI congregations. Last year Chan Thleng made a trip to Matupi and at the end of a conference of the elders there, they unanimously endorsed the proposal to become GCI congregations. 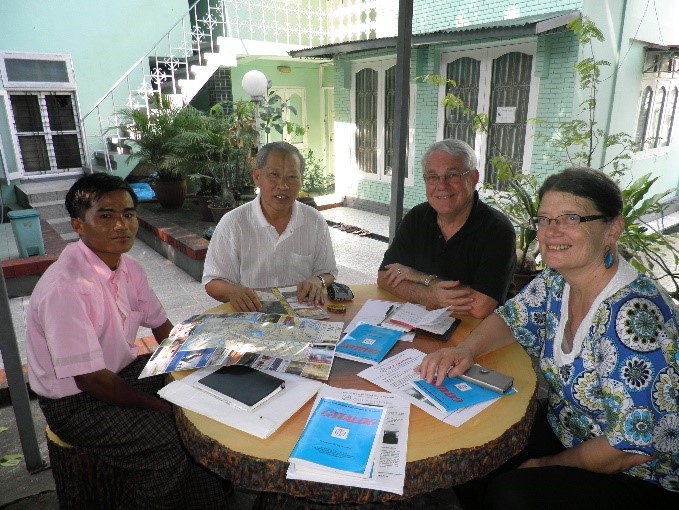 Last December, Ruth and I travelled with Wong Mein Kong and his wife, Chew Yeng, to Yangon, Myanmar to meet with Pastor Chan Thleng and visit his Hmawbi congregation. We first met at our lodging (see picture at right) where we discussed a wide range of topics related to our future together. We also planned the upcoming services in Hmawbi. What a great day it was!

After a 40-minute car trip out of Yangon, on roads getting progressively narrower (see pictures below, top row), we were welcomed to the Hmawbi church compound by nearly 70 men, women and children (see pictures below, bottom row). As per their custom, we were presented with leis of flowers and escorted into the church building. 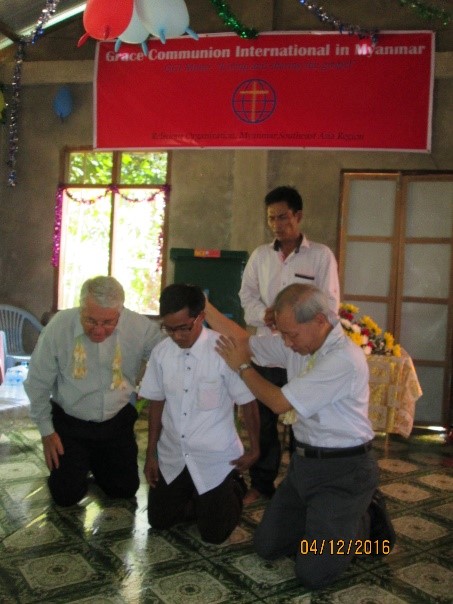 We joined the enthusiastic worship accompanied by a single guitar, and savored the warm welcome and community spirit. Most of the people are of Chin descent and speak only a Chin dialect or Burmese, and little English. Both Mein Kong and I gave messages translated for the audience. Next I rehearsed a little of the process that had led to this celebration and then, in front of the congregation and elders, prayed over Chan Thleng confirming his leadership as an elder in GCI and acknowledging him as our designated coordinating pastor for this group of congregations now part of our fellowship (see picture at right). The ladies’ group sang in celebration and the children presented two songs to everyone’s delight.

After the service, a community meal was served to the entire congregation, having been prepared over open fires on the property (see picture below). Chan Thleng lives in a small one-room house next to the church building; and not far away is a piece of land that the church has leased to grow lotus flowers to sell as a means of supplementing local income to support the church. 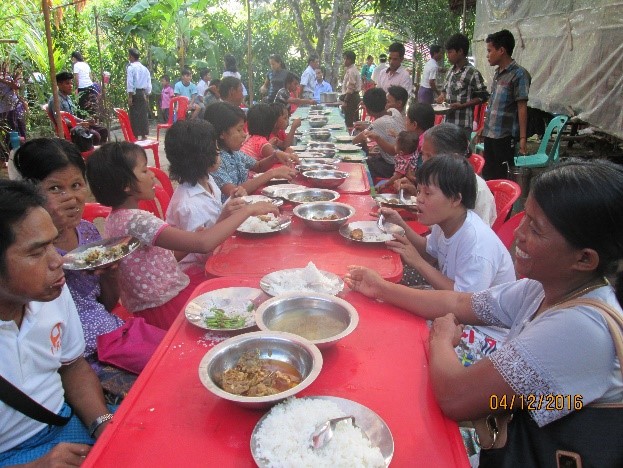 In addition to the Hmawbi congregation, there are another six in the Chin Hills, and one in Rakhine state, each with its own pastoral elder or leader, and with a combined attendance of over 300. Before we departed the Hmawbi church, Chan Thleng mentioned that it was his earnest desire to conduct a conference of elders in Matupi in March so all the elders in the group of congregations in the north could meet and hear from Wong Mein Kong and myself. Chan Thleng later, after a trip to Matupi, confirmed that the conference will be held there on March 24-25.

Getting to Matupi will be quite a trip for us needing a flight to Yangon, another flight or bus trip to Mandalay, and then a more difficult bus trip on rural roads into the high country in the west of Myanmar where Matupi is located. We are looking forward to meeting all these people who have been led to become part of GCI.

In a recent message, Chan Thleng reported on his trip to Matupi:

By God’s grace, and with one elder, I started our trip on Feb 10 and arrived safely on the 11th. We stayed two days in Matupi, visited church members’ homes and prayed for them and had worship services on two nights. We then visited six villages in the area [see pictures of the area below], holding worship services at night in which we told about GCI’s motto, vision, doctrines, ministries and Trinitarian theology. These people are interested in GCI and were blessed through our sharing. They love the meaning of grace, which some of them had never heard about before. God blessed this sharing of the gospel. One family joined GCI.

Concerning the planned conference in Matupi, Chan Thleng wrote this:

The topic for the conference will be GCI’s motto: Living and Sharing the Gospel. We plan to discuss about our planning for 2017—how to improve the work of the Lord spiritually and physically from now into the future. We will share our views and experiences, learning more about one another and the difficulties, failures, and successes we encounter.

We were surprised during our visit when Chan Thleng announced his plans to marry a young woman named Lydia, daughter of our elder in the town of Paletwa. We’ll have much to celebrate in March!

Myanmar has great potential for the expansion of GCI’s gospel work in Southeast Asia. We’ve been contacted by many small ministries and several Christian leaders running Bible Schools in Myanmar, including one in Mandalay where Mein Kong and I were invited to teach on this last trip. We’ve developed close friendships with several pastors who look forward to Mein Kong’s upcoming visits to that nation.

We have a particularly close relationship with a young man who lives in the China Hills area named Van Thawm Lian (pictured at right with his wife Priscilla and daughter Junia). With financial support from GCI, he has already translated and had printed a number of our publications in both the Burmese and Falam Chin dialects. Thousands of copies have been distributed to pastors and interested people throughout the Chin Hills area.

Just recently, Van Thawm Lian let me know that with the small donation of AU$250 that we sent him, he has been able to reprint another 2000 copies of our booklet “What is Salvation?” in Burmese, and now is distributing those booklets this his own evangelistic outreach. As other churches become aware of this booklet, they are asking Van Thawm Lian for quantities to distribute. He has established a small Bible School called the Freedom Bible Institute with about six students this year and is seeking more. One of his challenges is that no one from the rural areas of Myanmar can support themselves financially in a seminary and he has to provide food and lodging for them as well as classes. It’s both inspiring and humbling to see the sacrifices being made by and instructor and his students—people who sense a calling to learn and then to take the good news to their own people.

5 thoughts on “Good news from Myanmar”