I sometimes talk with believers who struggle to understand how the Holy Spirit, like the Father and the Son, is divine—one of the three Persons of the Trinity. I typically offer them examples of how, in Scripture, the things said about the Father and the Son, which assume they are personal, are also said about the Holy Spirit. I then note the many titles ascribed in the Bible to the Holy Spirit (see the list below). Lastly, I share some of what Jesus taught concerning the Spirit. In this letter, I’ll focus on that teaching.

In the Gospel of John, Jesus refers to the Holy Spirit in three ways: Holy Spirit, Spirit of Truth and Paraklētos (a Greek word translated Advocate in the NIV, Counselor in the RSV, Helper in the ESV and Comforter in the ASV). Scripture shows that Jesus did not view the Spirit as a mere reservoir of power. The word paraklētos, which means “one called to the side of,” is commonly used in Greek literature to refer to a person who takes up the cause of another and defends them. In John’s writings, Jesus refers to himself as a paraklētos, then refers to the Holy Spirit using the same term. 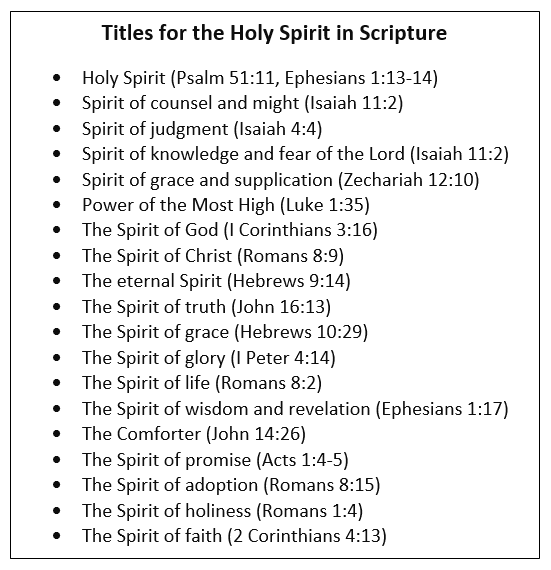 On the evening before his crucifixion, Jesus told his disciples that he was going away (John 13:33), though he promised not to leave them “as orphans” (John 14:18). Instead, he promised to ask the Father to send “another Comforter [Paraklētos]” to be with them (John 14:16, ASV). By saying “another,” Jesus was indicating that there was a first (himself), and that the one to come, like himself, would be a divine Person of the Trinity, not just a power. Jesus had been serving as their Paraklētos—in his presence (even in the midst of terrible storms), the disciples found the courage and strength to go outside their “comfort zones” to participate with Jesus in the ministry he was doing on behalf of all humanity. But now Jesus was going to leave and they were, understandably, deeply disturbed.

Up to that time, Jesus had been the disciples’ Paraklētos (note 1 John 2:1, where Jesus is called “an Advocate” [Paraklētos]). But now (particularly post-Pentecost), the Holy Spirit would be that Advocate—their ever-present counselor, comforter, helper and teacher. What Jesus promised his disciples, and what the Father sent, was not a mere power, but a Person—the third Person of the Trinity, whose ministry is to lead and guide the disciples in the way of Jesus.

We find the Holy Spirit operating in personal ways throughout the Bible: in Genesis, he hovers over the waters; in Luke’s Gospel, he overshadows Mary. He is mentioned 56 times in the four Gospels, 57 times in Acts, and 112 times in Paul’s epistles. In these references we find the Spirit, in distinctly personal ways, comforting, teaching, guiding, warning, determining and distributing gifts, interceding for us when we don’t know what to pray, assuring us of our adoption, and freeing us to call out to God as our Abba (Father) just as Jesus did. Note Jesus’ instruction:

In communion with the Father and the Son, the Holy Spirit has a distinctive ministry. Instead of speaking about himself, he points people to Jesus who then takes them to the Father. Instead of doing what he wills, the Holy Spirit implements the Father’s will in accordance with what the Son declares. The divine will of the one, united, triune God is thus expressed by the actions of the Father, through the Word (Jesus), performed by the Holy Spirit. We now can enjoy and benefit from the personal presence of God ministering among us by the Holy Spirit, our Paraklētos. United in being, act, will and purpose, yet distinct in three divine Persons, we worship and adore the Trinity.

Thankful for the Holy Spirit and his ministry,
Joseph Tkach

4 thoughts on “What Jesus says about the Holy Spirit”