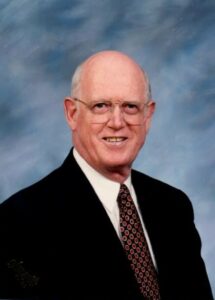 Robert (Bob) Paul Taylor passed away at his home in Franklin, TN on Thursday, January 6, 2022 at the age of 82 from Covid complications. He will be remembered as a loving husband, father, and granddaddy. Bob was born August 19, 1939 in Greeneville, TN to the late Paul Dean Taylor and Willie Irma GeFellers Taylor.

Electronics was Bob’s chosen field. He became a computer engineer with GE at the time when working on a computer actually required walking inside of it. After several years in the profession, he took early retirement from Honeywell. His continued interest in computers led him to begin setting up computer systems and software programs and into computer accounting.

As much as he enjoyed computer work, his most beloved job was pastoring which he began in 1995. He served congregations of the Worldwide Church of God (now Grace Communion International) in Nashville, Clarksville, Crossville, and Bowling Green. In 1999, he began serving as a District Superintendent over several states. It was in ministry that he met and came to love so many dear friends. After retiring in 2006 he helped many churches set up and maintain accounting software programs and performed financial reviews for them as well.

One thought on “Death of Bob Taylor”