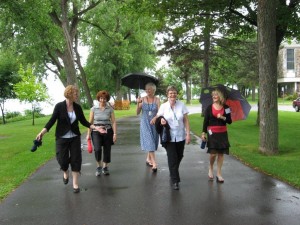 Fifty-six ladies enjoyed the 11th annual retreat organized by the Women’s Ministry of the Ottawa-Gatineau congregation. For the second year in a row, the location chosen was in a beautiful park reserve at the Manoir d’Youville in Quebec, which enabled the ladies to take beautiful walks through the park and enjoy the river surrounding this small island. This year’s retreat included ladies from five denominations and four provinces, as well as one from Washington State.

The worship music was superb, provided by ladies from various congregations. This year we also were blessed with a worship dance presentation. The talks were very much appreciated. Marge Haughton of the Smiths Falls congregation spoke on “Walking through the Valley of Death.” Dorothy Nordstrom from Edmonton spoke on “It’s Just about Love.” Dorothy’s sister, Ingrid Gula from Prince George, spoke on “My Depression, My Faith,” and Ingrid D’Andrade from Montreal spoke on “God’s Love Languages.”

It was a time the ladies could relax, laugh, cry, and speak to their sisters in Christ about some of their challenges, trials, hopes and dreams. Every year we wonder if we will be able to continue to hold this annual event, as there is so much preparation and work by numerous volunteers who sacrifice many hours and much energy and prayer to bring a retreat to fruition. But once again, after the retreat is over, and one sees the incredible benefit, growth and fruit born from so many ladies coming together and being inspired in and through the Holy Spirit, there seems to be no other decision but to start planning for next year. God willing, we will have a 12th annual retreat for this area in 2012.

Our local congregation in Abbotsford (Harvest Christian Fellowship) held its annual retreat last Saturday, June 25, at the home of Jim and Karen Miller. Todd Martin, our pastor, did a great job facilitating, as those who attended took a focused look at how our congregation is doing, and through prayer sought God’s direction as we seek to be useful and fruitful in his hands. Mike Baker, who recently moved from the Halifax area, was kind enough to share the pictures below. 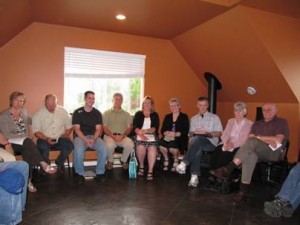 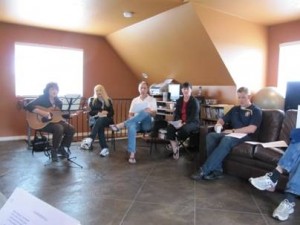 Leigh Smithson was in touch from Silvermeadows, the western summer camp. He said that there are 36 teens and 13 preteens, along with 22 staff. Leigh mentioned that Steve Posiak (pastor for our churches in the Okanagan region in British Columbia), and Amy Pena (our new pastor in Regina) are there, and are proving to be wonderful additions to the camp.

Craig and Debbie Minke’s oldest son Bryce was awarded two plaques at the Langley Christian School awards assembly. One was for Excellence in Humanities (Grade 11) and one is a Community Service Award “for service rendered unselfishly to the school or Community.” In addition, he was awarded a certificate of excellence in Math and Science. Congratulations to Bryce!

Finally, I have a report from Mark Yandt of the Ottawa congregation (see below). A couple of years ago Mark rode his bike across Canada to raise money for Camp Connections, our Eastern youth camp. This year Mark organized a 173-kilometer weekend ride from Ottawa to the home of Dennis and Lynn Lawrence in Montreal for members from the Ottawa and Montreal areas. Mark’s report is below, and the pictures prove they really did it.

Congratulations to the group (including my brother Karl who made the trek)! The funds raised are going to a very worthy cause, as the camp continues to make a meaningful difference in the lives of many. 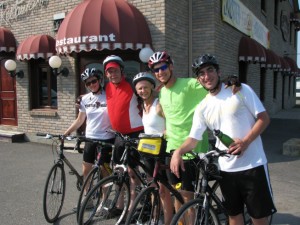 We did it! Great job riders! Thanks to everyone who supported us and followed our progress on Facebook as we traveled. The trip was a huge success. I know everyone wants to know how much we raised, but I will hold you in suspense and mention a few highlights and give a few stats first, so read on!

It was an extremely early start for the three team members from Montreal, who drove to Ottawa Saturday morning, July 2, to meet the riders from Ottawa. Spirits were high, though, and after a picture on Parliament Hill, Victor Zampino, Karl Moore, Elizabeth Ferlatte, Tina Yandt and I embarked on the first leg of what was to be a 110km pedal to Hawkesbury.

The team meandered its way east through Ottawa, leaving the city on Innes Road, where the plan was to meet up with the support vehicle (driven by Ingrid Zampino), which couldn’t follow us everywhere in the city. It was a pretty efficient 31.8-kilometer trip to the first break point. Everyone was fresh and the weather was fantastic, so this first bit was easy. A light snack and some sunscreen, and we were back on the road.

The only surprise on day one was the lack of asphalt! Road bikes can’t handle much gravel, so when we ran out of road, we navigated east, searching for paved roads. With a little help from Karl’s iPhone, we managed to find a route that didn’t take us much out of our way. 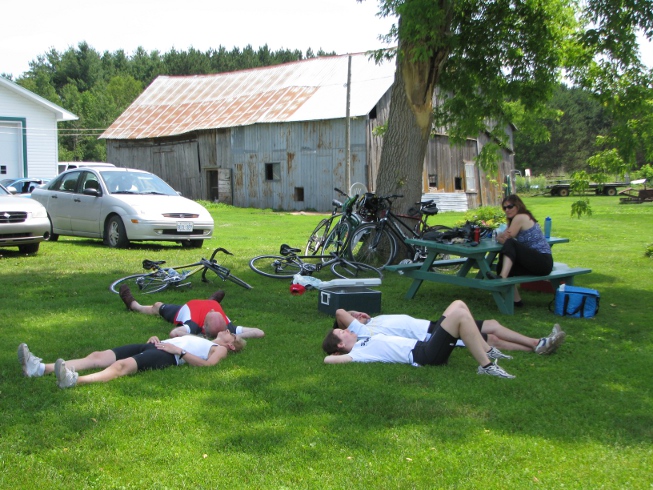 We pulled into Stephanie’s Motel parking lot at 4:55 p.m. Sun baked, with legs of jelly and slightly tender rear ends, only the thought of a cold drink and much-needed dinner was enough to motivate us to clean up and meet for some grub. With 110 kilometers of sun and road behind us, dinner could not have been more satisfying. We laughed and relived the day’s events over an amazing meal before falling into an exhaustion-induced super slumber! The team averaged 22.3 kph over the weekend and was on the road for almost seven hours Saturday.

Day two was another beautiful day. The sun was shining and there was a brisk west wind that pushed us all day. Nicole Lim joined us, which made the group six riders, and after a good breakfast we set out at 9 a.m. The route from Ottawa to Montreal is flat in general, but there were some hills to conquer. Sixty-two-and-a-half kilometers later, we arrived at the Lawrences’ home, where they welcomed us with cold drinks and a much-needed cool-down in the pool. And we were finished! 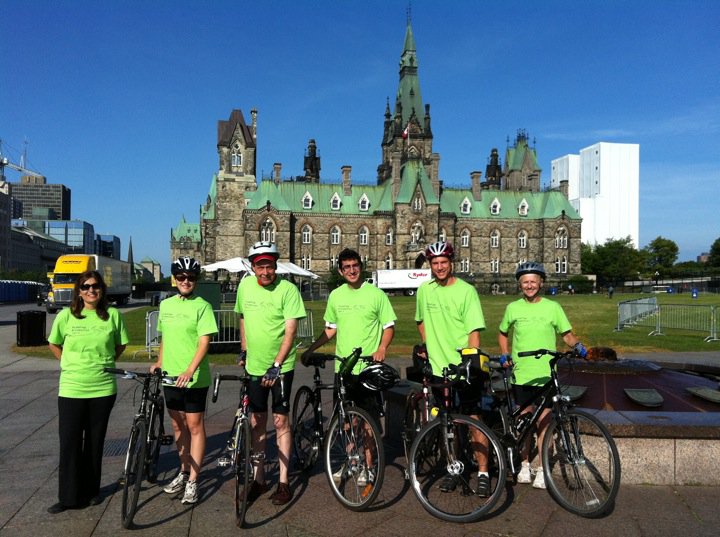 Thanks to the fundraising efforts of all the riders who peddled their kilometers prior to the trip itself, we gained an incredible amount of support from a huge number of people who had never supported the camp in the past! This not only gave us an opportunity to spread the word about the camp, but also to broaden our support base for the future. Thanks to Facebook, Twitter, and the wonder of the Internet, we were earning $24.12 for every km that the team cycled! All totalled, this means we gathered over $4100 of support for Camp Connections! It’s an achievement we can all be proud of!

We hope to see even more riders pedaling in Peddling Kilometers 2012. The team this year showed that everyone can participate! It’s an event for all ages and all levels of cycling experience! What an amazing adventure it was!

Bangladesh National Director, John Biswas, and I are excited to announce that GCI will conduct its first conference and development weekend in Dhaka, March 16-18, 2012. Our staff from the Bangladesh Evangelical Association (BEA) mission center near Barisal will travel to Dhaka, enabling some of them to visit the capital for the first time. Some GCI pastors, elders and church leaders from elsewhere in Asia and even further afield will attend to give our remote workers their first personal contact with fellow workers in the gospel from abroad who are also part of our international fellowship. This is a wonderful opportunity for visitors to see one of the world’s more populous countries, the contrasts of life in Dhaka, and perhaps a trip to rural Bangladesh. More details will follow in the months ahead.

Announcing the church’s first ever publication in the Tamil language! Through funding from the New Zealand congregations and individual donors, the Discipleship Course (Discipleship 101) was translated into Tamil in Sri Lanka for use among the large Tamil population there, the second-largest ethnic group in Sri Lanka. The work was done by a professional translator associated with Youth For Christ in Colombo, and 1000 copies were printed by the Colombo Theological Seminary (CTS), with whom we have a warm and growing relationship. CTS is selling the course in its seminary bookshop and is using it as a text in one of its basic Christianity classes. We are in the process of assessing whether this Sri Lankan Tamil translation will need revisions or can be used as it stands in Tamil-speaking areas of India and among Tamil speakers elsewhere.

Yelagiri is a delightful hill-country town in the northwest of Tamil Nadu state. Church members from across our southern Indian pastorate traveled there May 26-29 to attend a spiritual refreshment weekend with the theme of “Facing Our Christian Challenges.”

While most parts of India including Bangalore sizzled with hotter-than-usual weather, Yelagiri was cool. Forty-three members including eleven orphans attended. This was the first time we had the children from Dr. Suntharam’s orphanage attend. It was like an SEP camp for them. They were well behaved, responsive, and participated in and enjoyed all the games and activities. They sang the English hymns at services in the morning with gusto, and Dr. Suntharam gave a summary of the message in Tamil at the end of each day’s message.

A Bible study in Tamil was conducted for the children each evening of the weekend camp. Two ladies from the church spoke at these Bible studies. Before the study the children put up a special show with skits, songs and dances. All of them carried a Bible. They opened to the quoted scriptures very quickly and read them, much to the surprise of all present. Most of the children are from Hindu background.

Even though the cost of food and lodging at the camp center has increased to Rs.450 per person per day, the priest at the camp center charged us Rs.275 per person per day. The priest who manages the center was impressed with our group and offered to keep the rates the same for us in October when we visit the center for our annual family festival. We have accordingly booked the camp center from October 2-8, 2011. He offered to sponsor one child for every two children we sponsor for the festival. So it appears that the children will be attending with us from now on.

The food was amazing and in plenty. The campsite is surrounded by mountains, lots of greenery and fruit trees loaded with mangoes and jackfruit at this time of the year. The beautiful natural surroundings made it conducive to spend time with God, making the weekend a spiritually uplifting experience.