Curtis May, director of the Office of Reconciliation and Spiritual Mediation (ORM), submitted this report. 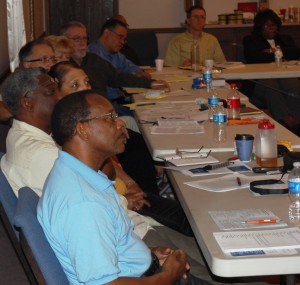 We held our bi-annual ORM Chapter Leaders’ Conference in Columbus, OH on October 7-9. I feel that this conference was one of the best we have had. It seems that ORM is entering a new phase. Kimberly Brummett, Director’s Office Program Specialist in the U S Justice Department, was a conference guest and observer. She said she enjoyed and appreciated it. She will report back to her boss, Community Oriented Policing Director Bernard Melekian. They are planning a national event on Reconciliation and Safe Cities in Washington, DC and are considering me as a guest speaker.

GCI elder John Connors, who has served as the CEO of various companies, challenged us to take ORM to the next phase of its existence. He pointed out that what began as a rather haphazard idea to “fight fires of broken relationships,” has developed into a full-fledged organization with the vision and talent to make a significant contribution in a hurting world. John reminded us that even though ORM is very much “of God,” it still is subject to the rules of good business practice. He told us that ORM had “come of age,” and must be ready for what comes next.

Tony Pierce and Cliff Parks updated us on the progress of their cross-cultural outreach in Peoria, IL. Their work is complex, expansive, and fits right in with the message of Jesus in Matthew 25 on helping to meet the needs of the poor, hungry and imprisoned.

Tom Pickett reported on ORM’s new broadcast opportunity on KCLE Big Country Radio Station in Cleburne, TX. The weekly program, titled “A Time to Reconcile” now has four regular broadcasters: Tom, his son David, Pastor Charles Dorsett and myself. You can listen to the program on the ORM web site by clicking here.

Other conference speakers included Jeff Broadnax, Evelyne O’Callaghan Burkhard, Willard High, Ron Washington, John Halford and George Hart. We also commissioned Pastor Larry Hinkle as a new chapter leader in Florida. We were joined in our final session, a worship service, by the CenterPointe congregation (the Columbus, OH GCI congregation) that hosted the conference in their church building.

ORM is now incorporated as its own non-profit organization. We are focusing on reaching an even larger community as God leads us. Our vision is to put the teachings of the Word of God into action by advancing relationships between people of different beliefs and points of view. Our website is at http://atimetoreconcile.org/.