This update is from John Halford, editor of GCI’s Christian Odyssey magazine.

On February 14 I joined GCI southeast Asian mission developer Rod Matthews and Malaysian pastor Wong Mein Kong in opening the Ambassador Kindergarten School in Chiang Mai, Thailand. This is the latest development in the remarkable Christian education enterprises of Chogait and Amphorn Garmolgomut.

I have told their story in Christian Odyssey. Chogait, a 1986 Graduate of Ambassador College and his wife Amphorn (Fong) opened several schools in this northern Thai city, and along the way developed a successful and growing ministry.

The school idea grew from a challenge from the late Dr. Herman L. Hoeh, who loved Thailand and all things Thai. Chogait and Fong had been raised as Buddhists. Now as Christians, they wanted to reach their people with the gospel. They asked Herman Hoeh what to do, and he suggested they start a school based on true values and right living. He gave them $100 to get started.

They started small with a school in their basement apartment, teaching in Thai and English. Many Thais want to learn English as it is a significant key to a successful career. As more students came, they were able to expand. 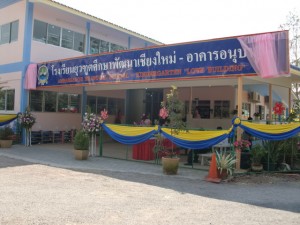 Later, Chogait and Fong leased an office building on the outskirts of the city. They renovated it, making it into a bright school for several hundred students Grades 1-6. I was privileged to help formally open the Ambassador Bilingual School (ABS) two years ago. At that time, they showed me an empty, semi-derelict warehouse that stood behind the main school. “That’s where the kindergarten will be,” explained Fong.

We formally opened the kindergarten on February 14. The old warehouse has been transformed and renamed the “Love Building.” Chogait asked me to say a few words to the large group of parents who had come to the opening ceremony. I told them that in the western world, February 14 is known as Valentine’s Day, when people give gifts to those they love. The school was also a gift of love, to the parents, the children and the future of the country.

The Thais are tolerant of all faiths, but the vast majority of the people remain staunchly Buddhist. Frankly, much missionary activity in Thailand gets nowhere as the Christian message is presented in a way that is out of context with Thai culture. However, traditional values are beginning to fray as Thailand continues to modernize. ABS teaches Christianity by example, and although making converts is not the focus, Chogait and Fong have baptized dozens of people in the last few years. Today a church of about 70 meets in their home. 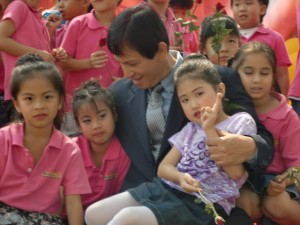 ABS now offers an education from kindergarten through middle school. Rod Matthews jokingly asked Fong “So where are you going to build the high school?” Without hesitation, she pointed to an empty lot next door. “We’ll put it there,” she said, “if that is God’s will.”

Psalm 127 reminds us that “unless the Lord shall build the house the weary builders toil in vain.” It seems that the Lord is building this “house” as the work is certainly not in vain. It is a success story that is attracting the attention of educators and missionaries in this country.

Here is how you can help be a part of this success story. Chogait and Fong are not asking for financial help. However, the challenge of running a bilingual school in Thailand is the lack of quality, affordable books in the English language. The Herman L. Hoeh Library, named after their friend and mentor, is in urgent need of books.

Many of us have books that our children and grandchildren have outgrown. If you send us those books, we can get them to Thailand. They do not need to be specifically Christian books, although those are welcome too. But any book for grades K-6, ideally with colorful pictures on any subject of an educational nature would be very welcome. They do not need to be new, but should not be too battered, torn or in any way defaced.

Do you have some books that ABS could use? Then email me at john.halford@gci.org and let me know what you have. If you can ship them to me in Indiana, we know how to get them to Thailand.

2 thoughts on “Growth of school in Thailand”