Some Christians are in the habit of using strange-sounding phrases like, “The Lord spoke to me,” “my prayer language,” “God gave me a word of knowledge,” “the Lord put a burden on my heart,” and “God gave me the anointing.” I’m not saying such phrases are wrong, nor is it my intent to mock them, but I do want to point out that the use of such Christian “in-speak” tends to detract from biblically accurate communication. In this letter I want to focus on the use (and misuse) of the phrase, the anointing.

In Scripture, the word anoint typically is used to refer to a way of confirming a special work that God is doing in or through a particular person. People are anointed for healing, in preparation for burial, and when being consecrated (commissioned) as a king, priest or prophet. When a priest or prophet would anoint someone to commission them for leadership, a transfer of authority (and thus power) to the one being anointed is sometimes noted. But it’s important to note that the one performing the anointing was not in control of that power—the anointing was not the equivalent of a dying king passing their rule on to a successor. Rather, the person who was anointing the king, priest or prophet was setting them aside in a public way to confirm that God truly had called that person into a particular leadership responsibility. For example, when the prophet Samuel anointed David, he was commissioning him as king, not transferring the Holy Spirit to David.

In Psalm 139:7-12, David shows that God is present everywhere (he is omnipresent). This means that the Spirit is not some sort of force under our control that we can transfer from one person to another through anointing. Moreover, Scripture shows that the Holy Spirit is not a “force” but a “person”—he speaks (Acts 13:2), is grieved (Ephesians 4:30), and has a will (1 Corinthians 12:11). By remembering that the Spirit is an omnipresent, divine person, we guard against false teaching, including the misuse of the word anointing.

Sadly, the word anointing is frequently misused. On the one hand it’s misused in referring to subjective experiences like “pins and needles” feelings. On the other hand, it’s misused to refer to a transfer of power (“receiving the Spirit”) akin to being given another helping of mashed potatoes! This wrong-headed thinking concludes that the Spirit is not present until hands are laid on a person, or that a person cannot have the Holy Spirit abiding in them until some action is completed apart from believing in the Son. These conclusions are badly mistaken—God does not fragment himself! Moreover, God’s being and doing is not conditioned (dependent on), nor determined by, for example, the use of our hands in a prayer. We can’t claim to be “alive in Christ,” and that he resides in us, then turn around and claim he is somehow not in us. The apostle John put it this way: “He whom God has sent speaks the words of God; for he gives the Spirit without measure” (John 3:34 NASB).

It may surprise some folks to learn that anointing does not involve a tangible transfer of power as if anointing is like plugging a television into an electrical wall outlet. The Spirit’s power is not a commodity to be purchased, traded, exchanged or accessed like a physical form of power. Moreover, there is no such thing as the receiving of a single, double, or triple portion of the Spirit as though receiving him is like scooping extra servings of food onto a dinner plate. The Bible never has Jesus or any of his apostles teaching that we can receive such an “extra portion.” What we do find in Scripture is a sorcerer named Simon being rebuked by the apostle Peter for trying to buy a portion of the Spirit’s power (Acts 8:9-24).

At this point, some might be wondering about the story of Elisha in 2 Kings 2, and the account of Pentecost in Acts 2. Let’s take Elisha’s story first. You’ll recall that the Jordan River was parted for Elijah and Elisha’s benefit:

When they had crossed, Elijah said to Elisha, “Tell me, what can I do for you before I am taken from you?” “Let me inherit a double portion of your spirit,” Elisha replied. “You have asked a difficult thing,” Elijah said, “yet if you see me when I am taken from you, it will be yours—otherwise, it will not.” (2 Kings 2:9-10)

Elisha’s request was made in accordance with the legal terminology of Deuteronomy 21:17, which specifies that the firstborn was to receive pî šnayim (“a double share”) of his patrimony. So Elisha was not asking for a double portion of Elijah’s anointing, but for a double portion of his spirit, meaning to be heir to Elijah’s office and gifts. Here is a case of misreading what is actually said in Scripture through an overly literal interpretation. If someone says “you’re pulling my leg,” you know what it means—you haven’t literally grabbed his leg.

In Acts 2, Luke tells us what happened on the day of Pentecost following Jesus’ ascension. There is no reference in that account to people receiving a “portion” of the Holy Spirit. Nor does Luke tell us that there was a transfer of power from one person to another. Rather, he notes that God audibly and visibly set apart those who were there through the outpouring of the Spirit. The word anoint is not even used in that account, though we may legitimately view it that way since the anointing came directly from God. As Luke notes, everyone heard Peter’s sermon in their own language. The skeptics accused the participants of being drunk (in our day, a few attempt to interpret this as being “drunk in the spirit,” but the text does not support any such idea). Peter set them straight:

These people are not drunk, as you suppose. It’s only nine in the morning! No, this is what was spoken by the prophet Joel: “In the last days, God says, I will pour out my Spirit on all people. Your sons and daughters will prophesy, your young men will see visions, your old men will dream dreams. Even on my servants, both men and women, I will pour out my Spirit in those days, and they will prophesy.” (Acts 2:15-18)

As Peter noted, this event was a fulfillment of prophecy. Jesus had instructed his disciples to wait in Jerusalem and they were blessed in doing so. It was the birth of the New Testament church.

Ultimately, the one who is supremely the anointed one is Jesus himself. His title, Messiah, is derived from the Hebrew word for anointed, and means “the anointed one.” “Christ” is the same title in Greek, derived from the word for anointee. In Scripture, Jesus Christ is portrayed as fulfilling in a full and final way the three anointed offices of prophet, priest and king. While in the Old Testament only special persons were anointed for God’s service, in the New Testament all believers receive the anointing by the Holy One (1 John. 2:20). God fulfills his plan for us by adopting us as his children by the work of Jesus in the Holy Spirit. That’s a true anointing—our sharing in Jesus’ own anointing, by the Spirit, who he sends to us in the name of the Father.

In the name of the Father, Son and Spirit,
Joseph Tkach

Here are links to reports on recent GCI events in Dubai and the Philippines: 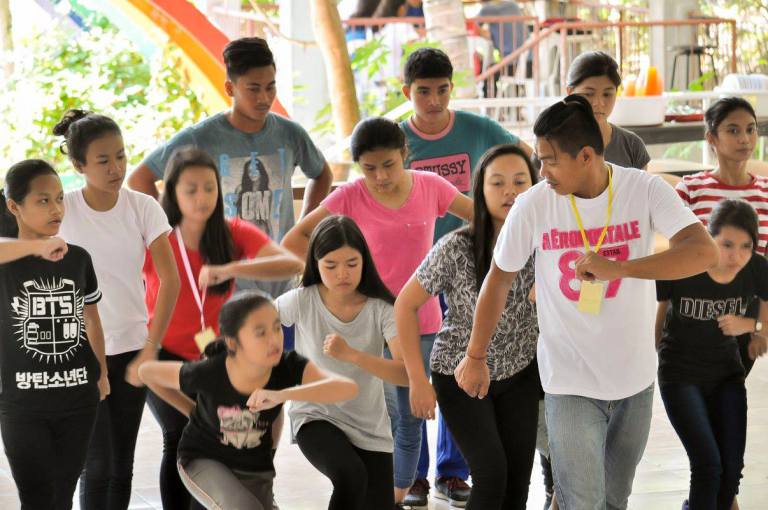 The church is called to participate with Jesus in his ongoing work to “make disciples” (Matthew 28:18-20). It’s important to know that this work is a relational endeavor, not a mechanical process. This distinction is helpfully addressed by Jeff Hawkins in a Leadership Journal article posted at http://www.christianitytoday.com/le/2008/spring/12.88.html. Here is Jeff’s conclusion:

The church is many faces gathered around the table—the Lord’s table. Only when we understand who we are can we hope to accomplish the work we are called to do.

Congratulations to the individuals listed below who recently were ordained as GCI elders. We also congratulate their families and congregations.

In addition to being ordained a GCI elder, Michael Guibord (pictured at right with his wife Brenda and Regional Pastor Randy Bloom), was recently installed as lead pastor of GCI’s congregation in Mt. Sterling, Kentucky.