I enjoy reading about archaeology—it’s an important and fascinating field of study that helps us understand how ancient people lived and how their civilizations developed. Though archaeology adds greatly to our understanding of the ancient world (including the world of the Bible), it is not accurate to say that archaeology “proves” the Bible. Though the Bible contains history, it is not primarily a book of history. Its main purpose is to share the story of God’s love and faithfulness, pointing us to Jesus. That information is primarily theological and thus cannot be “proved” from the artifacts of history. Such truths must be revealed to us by God himself, and he has used Holy Scripture as his tool.

That being said, archaeology does add to our understanding of the Bible. With the unearthing of ancient artifacts in the Near East, many archaeologists have seen the need to take a fresh look at the biblical account. The reality is that no archaeological discovery has ever contradicted those aspects of the biblical record that can be corroborated by archeological means. Steven Ortiz, professor of archaeology at Southwestern Baptist Theological Seminary and director of the Charles D. Tandy Institute for Archaeology, teaches that when irregularities occur, or conflicts arise between the findings of archaeology and the Bible, it has turned out that it is our interpretation of scripture that needed correcting. That’s a lesson worth remembering.

The biblical record has been confirmed through many archaeological excavations, including these three:

Though mentioned 50 times in the Old Testament, the Hittites were once thought to be nothing more than a biblical legend, casting doubt on the validity of people mentioned in the Old Testament such as Ahimelech the Hittite (1 Sam. 26:6) and Uriah the Hittite (2 Sam. 23:39). The first mention of Hittites in Scripture is with the story of Abraham, who bought a field from Ephron the Hittite (Gen. 15:20; 23:3-18). Later, Esau took two wives from amongst the Hittites (Gen. 26:34; 36:2). Archaeologists excavated the ancient Hittite capital city of Hattusa (modern day Bogazkoy, Turkey) in the late 19th and early 20th century. They found many records, which were corroborated by other extra-biblical references of the Hittite civilization. 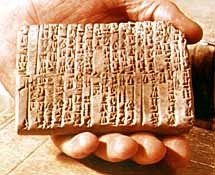 At right is a picture of one of the 1800 clay tablets (dated from around 2300 B.C.) discovered in the 1970s in Ebla, Syria. Critics and skeptics said that the name Canaan was not in use at such an early date and the word tehom (“the deep” used in Gen. 1:2) was said to be a late word demonstrating the late writing of the creation story. When archaeologists failed to find widespread destruction of Canaanite cities, they at first dismissed the Bible’s account of Joshua’s conquest. But when they looked at the book of Joshua more closely, they realized that only three cities were destroyed: Jericho, Ai and Hazor. This Ebla tablet demonstrates that the word tehom was in use at Ebla about 800 years before Moses, and it included the term Canaan. Ancient customs reflected in the stories of the Patriarchs have also been found in clay tablets from other archeological sites including Nuzi and Mari.

In 1993, a broken fragment of basalt stone was discovered at Tel Dan (at the foot of Mt. Hermon) in the north of Israel. The fragment came from a large stone about 12.5 inches high and 8.7 inches wide. Apparently, the stone had been purposely broken in antiquity. The fragment mentions King David’s dynasty, “the House of David.” Two additional fragments were recovered in two separate locations in 1994. According to pottery fragments recovered in probes beneath the flagstone pavement where the fragments were found, they were laid at the end of the 9th or beginning of the 8th century B.C. This discovery provided an archaeological connection to the biblical references of the ruling dynasty established by King David approximately two centuries before the events mentioned in the inscription. Not only is this the first mention of King David, it is also the earliest mention of a biblical figure outside of the Bible.

These and many other archaeological discoveries have confirmed the historicity of the biblical account. That does not surprise me, though it does fascinate me! If you’d like to read about more such discoveries, I recommend the e-book, Ten Top Biblical Archaeology Discoveries. To request a free copy, click here.

One thought on “How archaeology confirms the Bible”