This week we break with our “from the President” format to report on the ceremony held on October 14, 2018 in Charlotte, NC, where Dr. Joseph Tkach passed the baton of GCI’s presidency to Dr. Greg Williams. The report below was written by GCI-USA Regional Pastor Rick Shallenberger. For additional information about this historic occasion, click on the links at right. —Ted Johnston, GCI Update editor 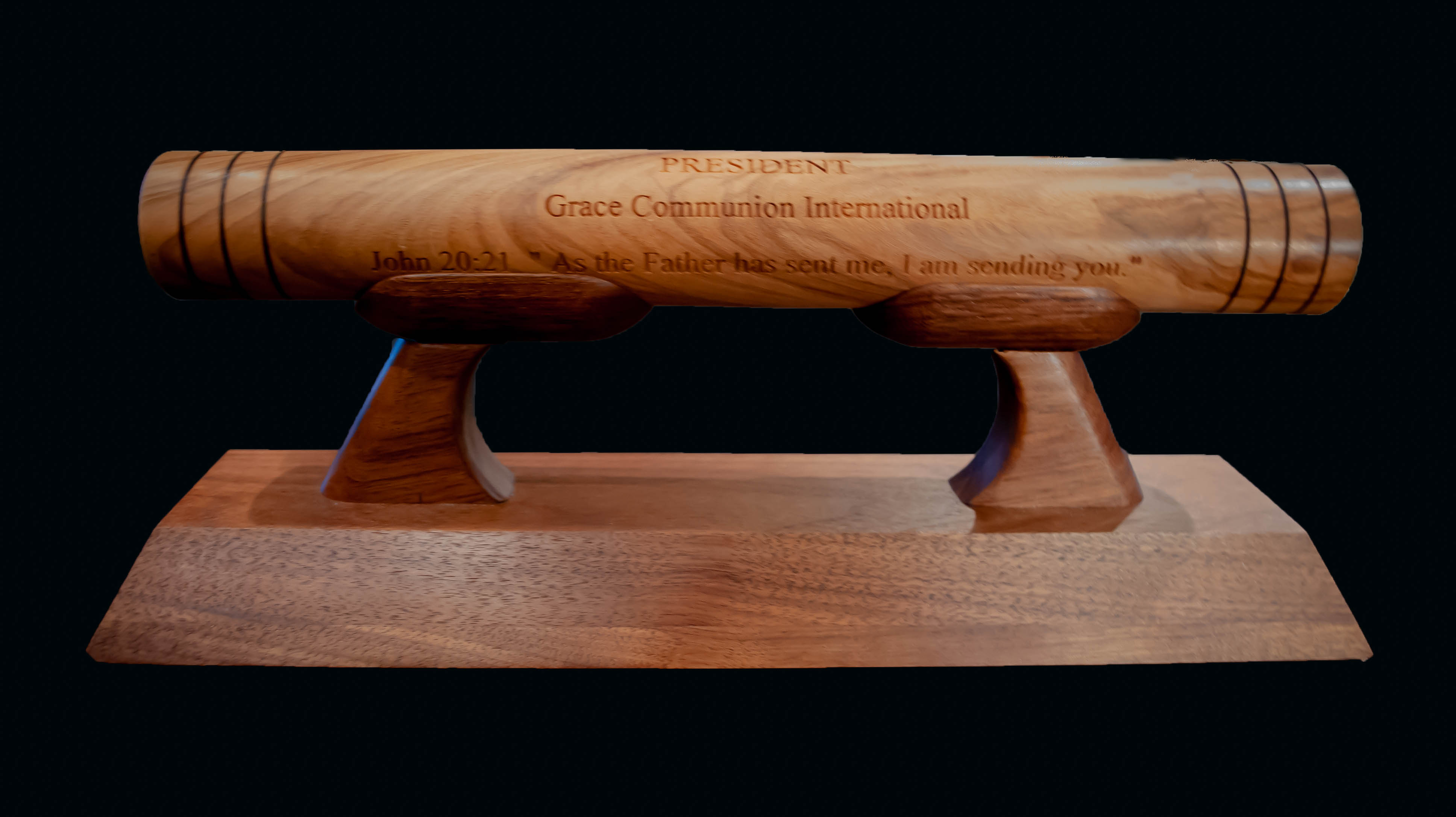 Never in my 58 years with WCG/GCI have I experienced a smoother, more meaningful transition in leadership. The honor given to Joseph and Tammy Tkach at the Passing of the Baton ceremony was equaled only by the support shown to Greg and Susan Williams.

The ceremony included presentations recounting the journey of change GCI experienced under Joseph Tkach’s capable leadership. Russell Duke (Vice Chair of GCI’s Board of Directors) provided an overview of the Tkach presidency. Michael Morrison (GCS Dean of Faculty) then gave a brief history of how Grace Communion Seminary began. That was followed by a presentation in which Celestine Olive (GCI Board Member) recounted how GCI’s teaching regarding women in ministry changed. Ted Johnston (GCI Publications Editor) then reviewed the process by which the denomination’s name was changed to Grace Communion International and the significance of the new name. Gary Deddo (GCS President) then addressed GCI’s journey of embracing incarnational Trinitarian theology. These presenters were then followed by President Tkach (pictured below) who addressed the significance and process of passing the baton of GCI’s presidency to Greg Williams. 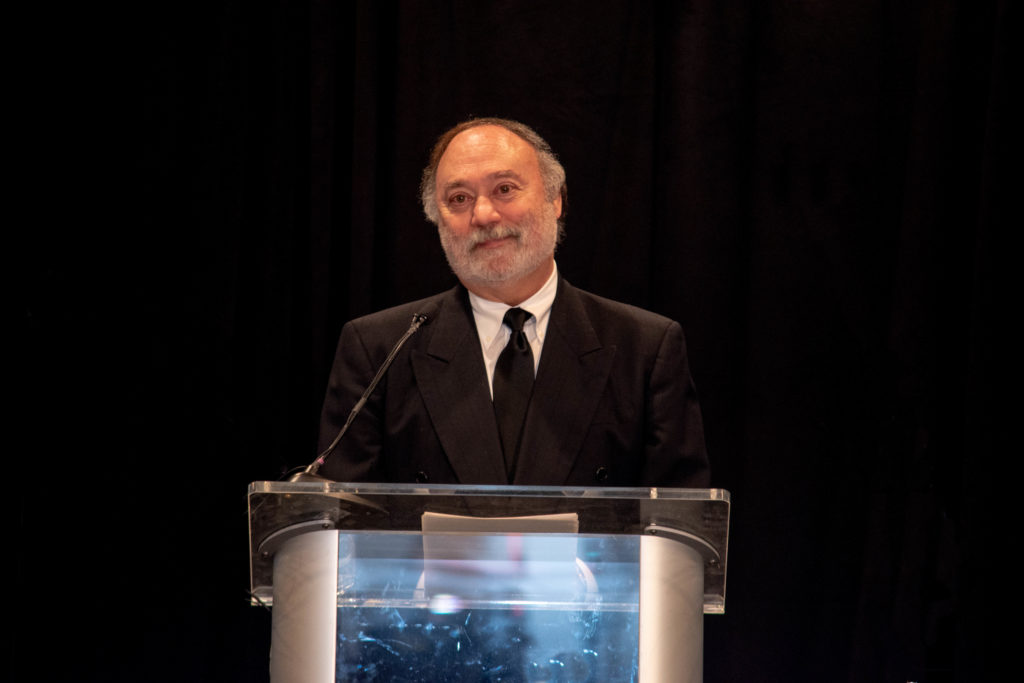 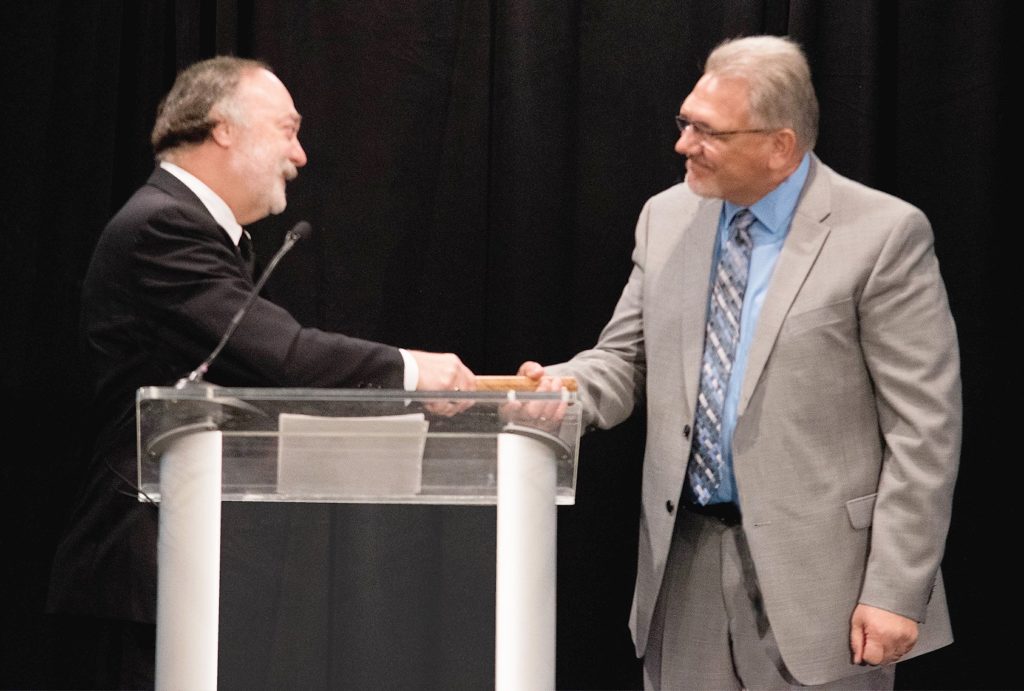 Following the passing of the baton (see above), Greg (below) addressed the audience, speaking about the way forward for GCI and his excitement concerning how the Father, Son and Spirit are leading our journey. The special worship service was concluded with Communion and a benediction as one era of GCI ended and a new one began. 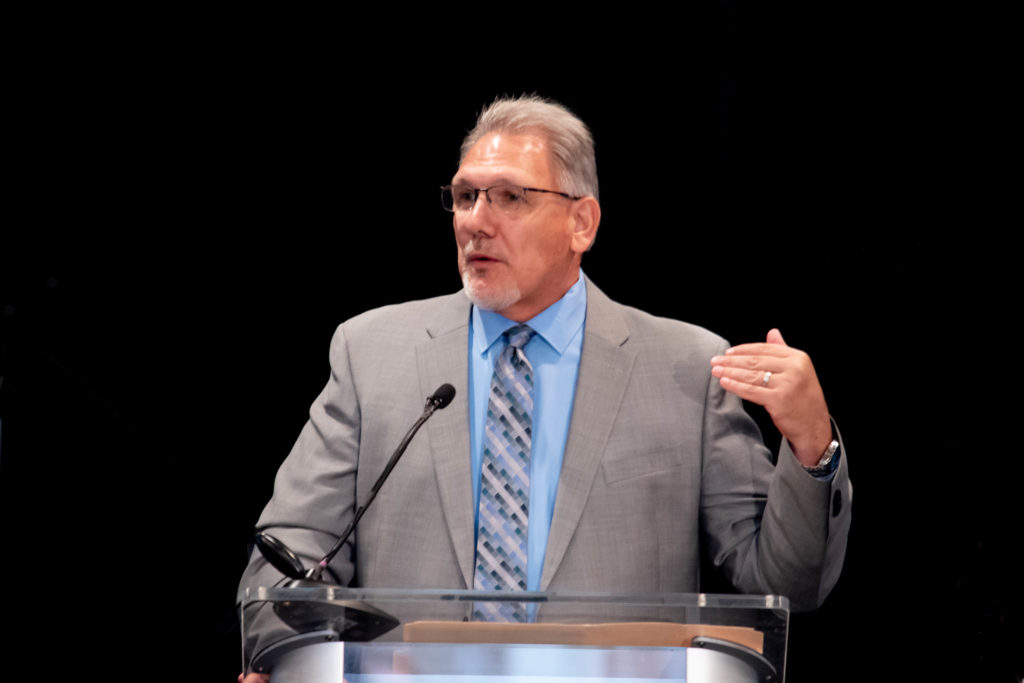 It’s hard to capture in words the wonder of what was a very special day. Hopefully, the pictures provided with this report, and the videos linked at left will help. Note as well the comments below from GCI denominational leaders who were in attendance.

Traveling from afar, it was a real privilege to be part of the Passing of the Baton service. From the call to worship, to the benediction given by Greg Williams, it was a very inspiring service. The choir and the worship set a wonderful atmosphere where speakers outlined events and accomplishments during Dr. Tkach’s tenure. The Communion service, led by Joseph and Tammy Tkach together with Greg and Susan Williams, summed up the love, unity and peace of Christ that encompassed the whole event. —Daphne Sydney (Assistant National Director, GCI-Australia)

It was an honor to attend the presidential transition ceremony. It was a living example of how peaceful, pleasant and yet profound leadership change can be when directed by the Holy Spirit. It was an example for any organization, large or small, of how such things can and should be done. Kudos to those involved, particularly Joseph Tkach for his willingness to pass the baton of GCI leadership with such humility, grace… and humor! —Randy Bloom (Regional Pastor, GCI-USA)

The best way to describe the passing of leadership from Joseph to Greg is to picture the orange, yellow and red glow of the horizon as the sun sets. After you take a few seconds with your eyes closed, enjoying the scene, you open them only to magically see the first ray of sun piercing the morning sky followed by the canvas of light bringing in a new day. It was a majestic moment for GCI. —Jeffrey Broadnax (National Coordinator, GCI-USA Generations Ministries)

The Passing of the Baton service was very moving—a powerful testimony to the grace in Joseph Tkach’s empowering servant leadership. We are seeing the future with excitement and are inspired to participate in this chapter of the GCI journey, fully supporting Greg’s leadership. It is great to be GCI! —Eugene Guzon (Mission Developer, GCI-Philippines)

Often in the past, passing the baton ceremonies felt like a pause in the race, with a stumbling restart and often a change in direction. On October 14, I saw no misstep or break in stride. The direction of the race is clear and the momentum earned by the outgoing president clearly carries over to the incoming president. —Tim Sitterley (Regional Pastor, GCI-USA)

It was exciting to be present at the beginning of this new chapter in GCI. I’ve appreciated the leadership of Joseph Tkach in getting us to this place in our history. I’m sure that I speak for all the Canadian members of GCI when I say that we look forward to the future under the leadership of Greg Williams. —Bill Hall (National Director, GCI-Canada)

To the household of GCI around the world, you can be well pleased with the love, grace and dignity that permeated this moving occasion of historic significance in our fellowship. We cannot underestimate the value of the years of service and sacrifice of outgoing President Joseph Tkach and his wife, Tammy, who were honored and celebrated in thanksgiving. Then Greg and Susan Williams were launched into the new role with personal love and enthusiasm and a swell of uplifting support. To God be the glory! —Rod Matthews (retired Mission Developer, Southern Asia and South Pacific)

Our members in Europe salute Joseph and Tammy Tkach for the wonderful job they have done in our fellowship, and celebrate the smooth transition to Greg and Susan Williams. Our gratitude goes to them for the inspiration they give our churches around the world—merci beaucoup, muchas gracias, muito obrigrado, dank u zeer, vielen Dank, mange tak, grazie mille, tusen takk, Благодаря ти много, tak så mycket, Ευχαριστώ πολύ, большое спасибо вам—thanks so much! —James Henderson (Mission Developer, Europe/UK)

It was a privilege to attend the worship service, including the transition ceremony in which Joseph Tkach passed the baton symbolic of the role of President of GCI to Greg Williams. Joseph has been used to provide stability and doctrinal direction for us through the most turbulent waters. For me, he has been an empowering and supportive leader and friend for whom I have the deepest respect. It was wonderful to witness the peaceful transition to Greg’s faithful, passionate leadership. —Gary Moore (retired Mission Developer, GCI-Canada)

I am humbled and honored to receive the baton as GCI’s fourth president. I have many memories from that day and felt overwhelming support from all who were present. One experience that was especially meaningful was the support from my family—all my children and grandchildren were in attendance. My younger brother Mark and his family came along to show support as well. Mark has not been an active member of GCI for the last 27 years, and he intentionally approached Joseph Tkach to congratulate him on the monumental changes that have occurred in GCI over the 23 years of his presidency. Those changes include the move to orthodoxy, the inclusion of women into ordained positions as church elders, the name change to Grace Communion International, the addition of Grace Communion Seminary and Ambassador College of Christian Ministry, immersion into incarnational Trinitarian theology, and the move from a corporate sole advisory board of directors to a governing board. What a strong foundation to build from going forward! —Greg Williams (GCI President)

Here is the bulletin from the Passing of the Baton service: 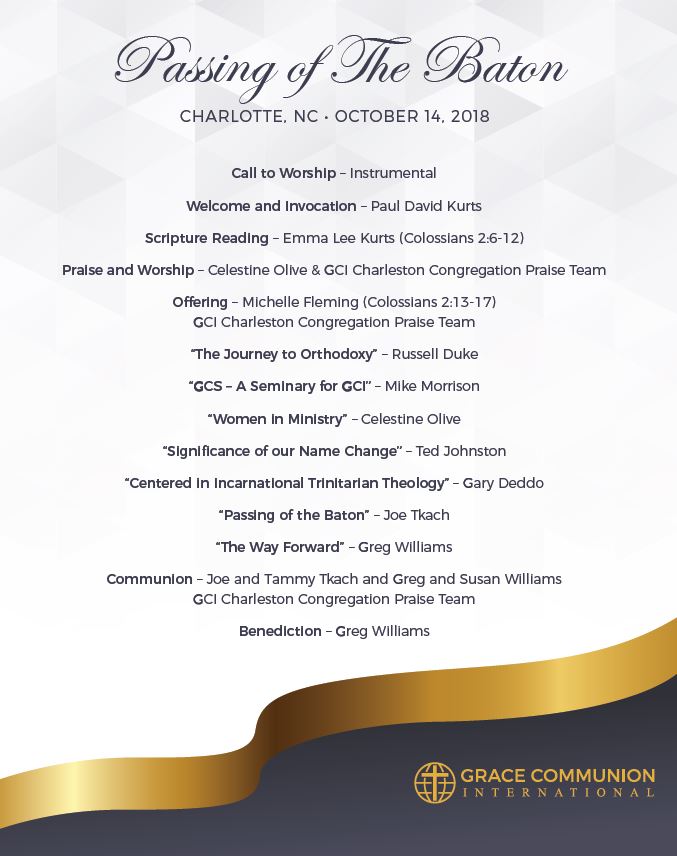 11 thoughts on “Passing of the Baton: report”