Please join me in extending hearty congratulations to Pastor Neil Earle. Neil was one of eight people to receive a Community Service Recognition Award at this year’s Duarte Mayor’s Thanksgiving Prayer Breakfast. Here is part of what was written in the program:

Neil Earle and Irwin Margiloff [curator of the Duarte Historical Museum] spent nearly a year researching, writing, and pictorializing the history of Duarte. The result of their efforts is the book Images of America: Duarte, a 127 page account of Duarte’s history from the time of Andres Duarte to the present.

Historian Neil Earle is a pastor and journalist for the Worldwide Church of God… Neil is also involved with DCTV Duarte Access where he volunteers his time and hosts the current events program, A Second Look, focusing on biblical archaeology, geography and other relevant subjects.

Neil interviewed You’re Included host Mike Feazell twice on A Second Look a few years ago when Mike was a resident of the city of Duarte.

We had set an agreement for all our scattered members and their families to meet with us in Port-au-Prince on the last Saturday of every month. In this meeting we spend hours sharing news, discussing current teachings in the church, making plans in the mission field and sharing communion. For the last two months, numerous difficulties arose that prevented us from holding this event that is so vital for the local church. We were glad that at least Daniel Leconte could make it, in spite of the long distance between Port-de-Paix and Port-au-Prince, as well as the extremely bad roads that can make the trip so hard.

So in November I announced a mission trip to Saint Marc to visit Serges Jacques and his family, and if it was possible, to meet with others to offer them articles translated into French. I was delighted when Serges told me that 15 to 20 people in addition to his family would be present.

We set Wednesday, November 18 (which was a national holiday) as the day for the mission and set out. Of course, everyone was aware of the ever-present danger of kidnapping, and the national road to Cap-Haitian through Saint Marc is a proverbial “road from Jerusalem to Jericho” where one is not likely to meet a “Good Samaritan.”

Nevertheless, we did meet one, by the name of Eddy, when our rented car broke down. Here is the whole story:

On Tuesday morning, November 17, I called the gentleman who usually gave us taxi-service and offered him a reasonable fare to take us to Saint Marc, wait for us, and then take us back home. He was already booked, so he referred us to one of his partners, whose name was Tom.

Tom agreed that we would leave Port-au-Prince at 6:30 a.m. Wednesday so we could make it to the meeting at 9:00 a.m. It is a two-hour drive on a good road. At 6:00 a.m. that morning, I called to remind him to pick up my assistant, André Naval at home and then pick up Bely Ferdinand (the new academic director of our school) and me up at the church hall. Tom told me that he was sorry, but the car had a brake problem and he had to look for a better vehicle. So I canceled our agreement and set out to find a better vehicle myself, but not before I rushed to the computer and sent Mr. Fleming and Pastor David a short note asking them to pray for my effort. Praise our powerful Lord; the mission was a fruitful one!

At 7:00 a.m. we finally found a taxi driver who was willing to make the trip to Saint-Marc – and to go slowly because we were in a hurry. (Napoleon Bonaparte once told his driver, “De grace, do not drive so fast, because I am in a hurry!”).

We finally got out of the main city traffic at 8:00 a.m. We filled the tank and drove on carefully. I called Serges to let him know that we would be about an hour late. He said everyone would be patient. We passed three villages with no sign of any problem. Suddenly, at 9:30 a.m., in a bushy zone halfway between Arcahaie and Montrouis, the car broke down.

Montrouis is the last village before reaching Saint Marc. We all stepped out of the car. I called Serges to beg a bit more patience, and told us not to worry. Then a stranger appeared offering help. The driver panicked, but explained that we were broken down. The stranger, whose name was Eddy, asked where we were heading, and I told him we were visiting a family in our church who live in Camp Mary near Saint Marc.

He said, “Good people. I like to see that,” and then offered to call someone who knew a mechanic.

I asked him if he was a Christian, and he said he didn’t go to church.

I offered him a copy of the French version of Dr. Feazell’s article, “Getting Real” and Dr. Tkach’s article, “Crown of Thorns.” Eddy accepted them with joy and asked when we might have another meeting so he could come to it. He helped us find a Tap-Tap (a small pickup truck), and we finally made it to Serges’ home at 11:00 a.m., where 22 were still waiting patiently.

Some of Serges’ guests were Sunday school leaders and deacons in evangelical churches of the community. We spent two hours discussing the permanent humanity of Jesus and his representative role before God the Father on behalf of all humanity as well as questions about hell, judgment, conversion and so forth. But the main question I ask you to pray about is this one: “Pastor, when will you be back for another study like this?”

As the old baker’s proverb says, “We have bread dough on the bench.”

Summer is arriving in the southern hemisphere, which means the December summer camp program will commence soon in Zambia and South Africa. We will be providing assistance to both camps this year, which is greatly appreciated. The camp for Zambia, Zimbabwe and Malawi can only take place with our help, and this year the South African economy has been hard hit by the global recession, so our help is greatly appreciated there, too. We’ll provide $3000 to each camp. Half of the $6000 total is coming from the Red Deer, Alberta, church and the Crossfield, Alberta, small group church. The other half is coming from our African Missions Fund. The Africa Missions Fund is a fund that any member may contribute any amount to, regardless of how small. It will be included in their annual tax receipt along with their regular donations. This makes it possible for individual members to help with world mission in our fellowship directly, even if their local church budget cannot afford to help on a congregational basis. We don’t want this fund to compete with funds for the running of the church, but even an extra $5 or $10 can add up and make a big difference if a number of us get involved.

On a related note, the Toronto East and Vancouver congregations have donated $5500 to help with disaster relief in the Philippines in the wake of this fall’s typhoons and floods. Also, the Toronto East church has donated $2000 to support a major outreach by Hector Barrero (pastor of our Bogota church, and National Director for Colombia). Hector does a local radio program and will promote public marriage seminars that this funding will make possible. This was done earlier this year, and proved to be very successful, with several marriages and baptisms resulting.

Thank you for your prayers and financial support for the visit to Musoma, Tanzania. God is wonderful in the way he reveals himself in spite of our weakness.

Kimani and I arrived in Musoma at 4:15 p.m. after a three-and-a- quarter hour bus trip. The flight from Dar es Salaam to Musoma was canceled. We were flown to Mwanza and then bussed to Musoma. Compare a plane fare to a bus ride! The same happened on our return trip. This is Amazing Africa. Initially there were no explanations and apologies given for the inconvenience. Later, we extracted some information from travel agents that the regular plane to Musoma was undergoing routine maintenance.

We attended morning and afternoon worship services on Saturday. Kimani delivered a morning sermon titled, “The History of Salvation,” which was about the Triune God. In the afternoon, I addressed the practicalities of the presence of Christ in a Christian’s marriage. Attendance was around 80, including a few children. 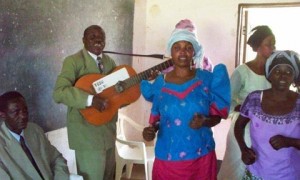 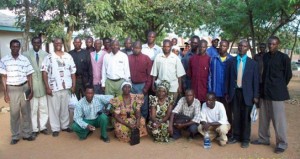 Longtime elder Lateef Edalere, who served many years in Nigeria and Jamaica, has been ill for some years following a series of mini-strokes. In October, Lateef suffered a major stroke resulting in him being partially paralyzed and without sight and speech. He is unable to swallow and is being fed through a tube. Your prayers are requested on his behalf for God’s intervention and his will at this very difficult time.

Pastor Glen Weber wrote, “This is a bitter-sweet email to have to send, that our brother and elder in our congregation, Glen McCutchan, has passed away. Bitter because we will dearly miss him, but sweet because he is no longer in pain and has, in the apostle Paul’s words, gone to be ‘at home with the Lord.’”

Glen’s widow, Barbara, wrote, “Glen passed away at 7:05 this morning. I am waiting for Hospice personnel to come to sign the death certificate and then they will call the funeral home. Karen and grandson Jason arrived last night and are here with me. We are all doing okay, just glad that Glen is no longer in pain. This past week has been a long one for us.”