It’s a busy summer for GenMin camps and missions. Here are two updates: 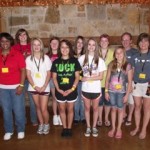 CrossWalk’s last session was held in late spring with 72 volunteer staff members serving 68 campers. Camp director Mike Rasmussen reports that they learned the great importance of cross-training their staff. Several staffers were unable to serve due to other commitments. Fortunately, the remaining staff were able to fill in. As a result, the camp met a primary goal – having a one-to-one staff to camper ratio. They also met another important goal – to increase the number of unchurched campers. Mike reports that the next CrossWalk session in November will be a “Family Camp” instead of a “Teen/Young Adult Camp”. So far, there has been a positive response to this development.

GC Trips director Janet Morrison reports that we have a group of young people currently on a short-term mission trip in the Bahamas. You can follow their progress on their blog.