Kalengule Kaoma, the GCI mission developer in Africa, reports on his recent trip to Liberia: 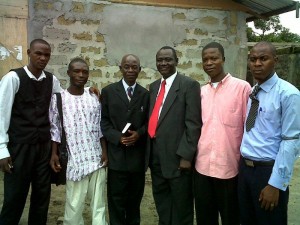 I have been corresponding with three contacts in Liberia for about a year. Recently, I spent a few days in Monrovia, Liberia. The visit produced fruitful results with one of the contacts through Pastor Robert Browne (with red tie, together with his executive team in the picture at right).

Pastor Browne has two small congregations in Monrovia and five others in rural areas of Liberia. Together, there are about 180 people including children. I spoke to executive and ministry leaders about their intentions of being part of GCI. On Sunday, I met and spoke to the church in Gardnersville, Monrovia (pictured below). The enthusiasm and excitement made all of us rejoice together in the Lord with praise. 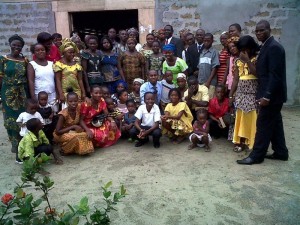 Like most affiliations in Africa, the Liberian one is being considered within the bounds of God’s love (John 3:16) to work together in reaching and ministering to people where they are. The Liberian brethren strongly feel that they will benefit from GCI spiritual guidance and knowledge.

Four months before leaving for Monrovia, I lost contact with two other Liberian contacts. While in Liberia, I tried to call their phones but both of them were not reachable. However, after I returned to Lusaka, I have reestablished contact with the two leaders. They are eager for my return visit to Liberia.

Your continued prayers are appreciated for this new door.

One thought on “Report on trip to Liberia”