When I read Scripture these days I do so through a “trinitarian lens” and then I think about how what I find applies to our contemporary context.

In the first eleven verses of Isaiah 40 are four dramatic prophecies concerning the hope of God coming to rescue his exiled people, the Jews. In verses 1-2, God tells the prophet to “comfort, comfort my people” who are exiled in Babylon. Then in verses 3-5, a voice cries, “prepare the way for the Lord,” as a highway of rescue is formed through the desert leading from Babylon back to Judea. In verses 6-8, the prophet announces that though life is ephemeral (“all men are like grass”), God’s word of rescue and hope is eternal (“the word of our God stands forever”). Then in verses 9-11, those keeping watch over the ruins back in Jerusalem are called by God to declare from the highest height that God’s victory is sure – he will bring his exiled people home and sustain them in a work of rebuilding.

This is not a message of doom, but of hope – humanity’s hope in the God who is the Deliverer and Rebuilder. I pray that this message will resonate in your heart, bringing you hope in difficult times. And I pray that it will move us to action as a people called to share this message with the world. Concerning our part as a fellowship in that work, I encourage you to read the accounts in this issue of Weekly Update (click on the links above the line at left; links below the line are for general reference). It’s my joy and privilege to share these stories with you.

Warm Advent greetings from my family to yours, 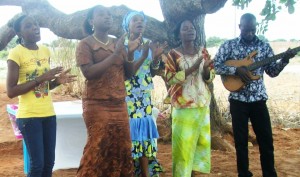 On September 2, GCI members from Luanda visited Bengo Catete, which is 44 kilometers away. Their goal was to strengthen the members of a new congregation of immigrants being led by Pastor Fragoso. This congregation has 32 members, including children.

The group gathered for worship, meeting in the shade of a large tree. After a sermon from Pastor Oliveira, they received the testimony of a new member (Papa Garcia) who has been a deacon in the Church of the Seventh Day. He shared his thanks to God for inspiring GCI’s pastor general to lead people in the good path of the gospel of Jesus Christ, which has led to this new alliance of churches. 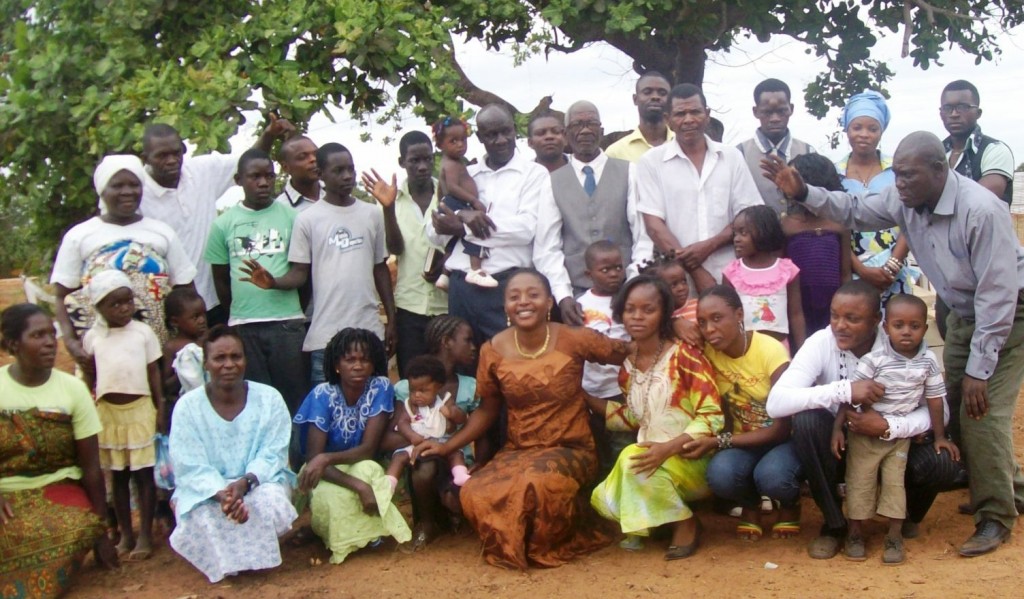 Good News Fellowship, the GCI congregation in Nashville, TN (pastored by Jonathan Stepp) hosts Community Cafe following its worship service each Sunday. The purpose of the Cafe is to feed homeless people with both food and the hope of the good news of God’s grace.

Some homeless or otherwise disadvantaged people walk to the Cafe. Others are driven to the Cafe in the church’s van. Several of the Cafe regulars attend the worship service before the meal, though the meal is available to all, whether they attend church or not.

Each week, the simple, yet tasty and nutritious meal is prepared at home by church members who then bring the food with them to church where it is heated and served in the fellowship hall in the building where the church meets. Here are some pictures.

The following report is from George Hart, pastor of Christ Community Church (CCC), one of GCI’s congregations in Cincinnati, OH.

For the third year in a row, CCC reached out to the community around our church hall the Sunday before Thanksgiving with Thanksgiving meals. The meals included all the traditional Thanksgiving trimmings and a gift certificate for a turkey at a local grocery store. The congregation donated enough food items and cash to put together 100 complete meals.

Our worship service that day focused on Matthew 25:35 “For I was hungry and you gave me something to eat.” To emphasize that giving and service are worship, we assembled the meals as part of our worship service. After a brief message we made application of Jesus’ teaching. Everyone got involved. The kids bagged candy for the meals, adults assembled the meals and those who were not able to stand offered prayers for the community. We then enjoyed a pizza lunch and delivered the meals to homes nearby.

The area around the hall where our church meets is one of the lowest-income communities in the county, with many school-age children. One lady started crying and said, “I didn’t know how I was going to provide a Thanksgiving meal.” One little child said, “Food! Now we can eat!” The impact was tremendous both on the community and on our members.

The following report is from Kalengule Kaoma, GCI Missions Director for much of Africa.

Many church groups in Rwanda have written to Grace Communion International for affiliation, financial support, prayer and other spiritual needs. Recently, I traveled to Kigali, capital city of Rwanda where I met the leaders who have written GCI.

On October 1 I met 12 leaders representing eight independent churches. Our meeting lasted close to four hours. We discussed various concerns and questions ranging from affiliation with GCI to orphan support. We have been requested to facilitate reconciliation efforts among church group leaders and communities where churches are established. It has been 17 years since the Rwandan genocide in 1994, and some quarters of society, including Christians, are still skeptical and suspicious of each other. “Please come back quickly and minister to us. We need to work together as church leaders” Bishop Benjamin Sibo-Muzi encouraged me.

After meeting the 12 leaders, I had several other meetings with leaders who are interested in being part of the GCI community. On Sunday, I had an opportunity to speak to 250 believers who joyfully and gratefully sang to our awesome God.

It is clear that a door is opening for GCI to be established and registered in Rwanda. Please pray for committed contacts with whom to work.

After Rwanda, I visited Malawi to commission a church building for the church we planted about four years ago in Mombezi.

Before starting that church, Mr. Mape and his wife travelled 19 kilometers each way by bicycle to attend GCI church services in Mpanda. On their way to and from that location, the Mapes crossed a river by canoe. After a while, the GCI Malawi leadership team encouraged Mr. Mape to start a cell group in his home community of Mombezi. He did so, and the group grew to an average of 25 adults in weekly attendance.

Gardner Kunje, GCI Malawi National Ministry Leader and his team decided to construct a meeting hall for the Mombezi church. In 2010, Mombezi members molded bricks and baked them in firewood kilns. Construction of the meeting hall started in April 2011. Dedication and commissioning of the building took place in a service on October 8, with 300 in attendance. Among those attending were village, community and church leaders from churches in the neighborhood. When the traditional group village headman spoke, he acknowledged that GCI has a visible presence in the community. Since the dedication, average weekly attendance is up to about 45.

Please pray that God will provide committed, knowledgeable leaders to serve our churches in Africa.

On Sunday September 25, members of the GCI/WCG congregation in Manchester, England combined with members of the St. Andrew’s Church for a joint Back to Church service.

The previous Saturday leaflets were distributed to homes in the area. The leaflet featured an article by GCI member David Bedford describing his impressions when he first started attending church. He was expecting to find near perfect members, but it wasn’t long before he realized they had as many flaws as he did. Then, reading the Bible more closely, he realized the New Testament was full of flawed individuals as well. The leaflet then gave encouragement to respond to the invitation to attend the special Back to Church service, knowing that the members of the church are not perfect, but trying to serve God.

David also led the service, with other WCG members doing a scripture reading and playing piano for hymn singing. The Rev. Lisa Battye of St. Andrews gave an encouraging and uplifting message about the healing of the paralytic man as covered in the scripture reading. Rev. Battye then concluded the service by leading Communion. Following the service, the two congregations joined in fellowship over tea and refreshments. 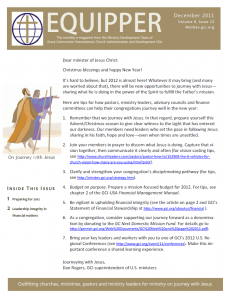 The December issue of Equipper is now available online at http://mindev.gci.org/Web%20Documents/Equipper6.12.pdf.

This issue is devoted to helping congregations prepare for the New Year.

We received word that our members in Kinshasa, Democratic Republic of the Congo were being exposed to danger due to violence surrounding the recent elections. As far as we know, none of our members were injured, but we request prayer for their safety.

Hazel was taken to the hospital recently, having lost most of her mobility. This condition is apparently due to restriction of blood flow to the brain, though her doctors are still running tests. It is anticipated that Hazel will return home this week. Prayers for her full and rapid recovery and for Jim are appreciated.

We are delighted to report two recent elder ordinations and a pastor commissioning.