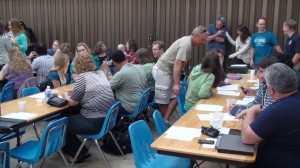 A principal focus for the summit was to explore GenMin’s mission to help congregations build cross-generational communities that share actively in Jesus’ mission. A principal GenMin concern is helping churches identify, equip and deploy a new generation of ministry workers, pastors and church planters. Toward that end, GenMin programs are designed to be “incubators” of young leaders.

It was also announced at the summit that GenMin has formed a Mission Event Resource Team, made up of leaders from GenMin short-term mission agencies and others with mission experience. The team met at the summit to brainstorm ways to help resource GCI congregations and ministries for conducting mission events of their own to reach out with God’s love both locally and globally.

To learn more about GenMin’s camps, mission events and other programs, go to http://genmin.gci.org/.