Summer is a busy season for youth camps in GCI around the world. Here are reports from recently completed camps in the Philippines and in India. 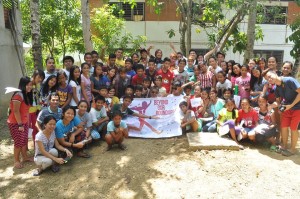 This year, three SEP camps were held in the Visayas region of the Philippines, serving a total of 145 campers. Some of the campers and staff had endured the horrors of the Bohol earthquake in October and supertyphoon Yolanda in November of 2013. These disasters occurred at the time camp planning normally would have been underway. Instead, GCI Philippines focused on disaster relief and rehabilitation. Nevertheless, God provided not only one camp in the Visayas, but three!

One of those blessed by these camps was Juvy, a camper from Tacloban, which had been “ground zero” for Yolanda’s devastation. During camp, Juvy tearfully recalled the tragedy in which her best friend died in the supertyphoon. She remembered how Tacloban residents had been going about their normal laidback ways (including karaoke and drinking sessions) the night before Yolanda hit. In the aftermath, some survivors wanted to “rent” her father’s acetylene torches for 50,000 pesos ($1150.00) so they could break into bank vaults. Her father refused. Several days later, GCI Philippines director Eugene Guzon and others visited and Juvy’s father was given 50,000 pesos in assistance! Juvy spoke about the goodness of God expressed through the church. This goodness raised the hopes of the downcast. Juvy was one of five youths at camp who, in being baptized, indicated their commitment to follow Jesus as one of his disciples.

GCI in India held a summer camp in early May in the city of Hyderabad. 40 campers, age 10 to 15 were served by eight staff members. Most of the campers were from the Faust School and friends of our children from church.

Each day, camp began with physical activity, breakfast, another round of games and then a Bible study and values education followed by lunch. After lunch campers rested for a while since the temperature outside was touching 40° Celsius (104°F). Evening programs began with tea and snacks at 4:00, then games and swimming until sundown. Children watched a movie before dinner and later updated their journals and retired for the day. 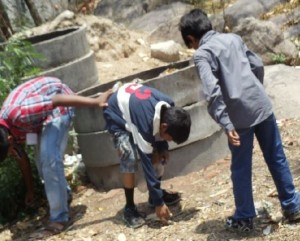 Pastor Dan Zachariah taught the Bible studies, explaining the love of God and how he made things possible for us to live in relationship with him. He also taught the children how to journal—reflecting on how they spent the day with their friends. Guidelines on public speaking were discussed in one of the classes and all the children were given the opportunity to deliver a speech. The importance of community service and being environmentally conscious were made known to the children. The children enjoyed picking up garbage and attempted cleaning jobs people usually don’t like to do in the community (see picture at left). Besides these activities, the campers enjoyed trekking, rope climbing, swimming and rain dancing.