This update is from Rod Matthews, GCI mission developer in South Asia, New Zealand and the Pacific. 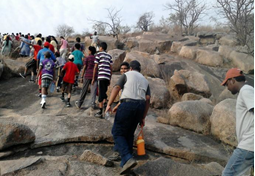 Our church in Hyderabad, India conducted Summer Educational Program (SEP) 2014 in May with 40 campers age 10 to 15 and 8 staff members. Most of the campers were from Faust School and friends of children in our church. The three days of the camp were packed with activity, including rock climbing (pictured at right). Each day also included a Bible study and value education. The children were taught stories that illustrate God’s love and how he makes it possible for us to live in relationship with him. 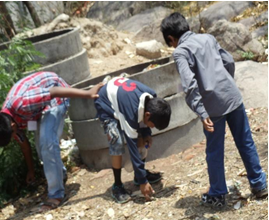 Pastor Dan Zachariah taught the children how to journal their thoughts—reflecting on how they spent each day. Campers were taught public speaking and had opportunity to deliver speeches.

The importance of community service and being environmentally conscious were made known to the children who surprised us by picking up garbage and taking care of cleaning jobs that people usually don’t like to do in the community (see picture at left). 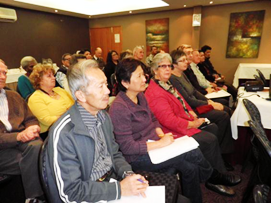 Pastoral team members from GCI-New Zealand plus invited guests from around the Pacific gathered for a conference in Wellington, New Zealand in July. The 28 participants enjoyed fellowship and being reminded of the scope and diversity of the work in their portion of “the field.”

Conference presentations centered on the theme, “GCI’s part in Aotearoa New Zealand,” celebrating the bicentenary of the first preaching of the gospel in New Zealand on Christmas Day 1814, and the establishing of a mission outpost. Samuel Marsden, an English missionary resident in Australia, had been invited by Ruatara, a chief of the area. Marsden preached from Luke 2:10, “Behold I bring you tidings of great joy….” The GCI conference rehearsed this history as a backdrop to discussing GCI’s place in spreading the gospel within New Zealand and elsewhere today.

The weekend began with an address from Joe Tepania, a local kaumatua (elder and leader) who reflected on life and progress, Christian and otherwise, seen from a Maori perspective. Fundamentally important is to know and value one’s roots (whakapapa: historical and cultural connections that define us) yet pioneer new paths as a gift (koha: gift of the heart, in good faith) to those around, and who follow after. His thought-provoking talk laid a beautiful platform for what followed.

Rex Morgan (Auckland), then reviewed Christianity’s history in New Zealand. Early evangelism, mostly Maori passing the message amongst themselves, resulted in around half of all Maori becoming Christian within about 40 years. War and blood feuds became rare, agriculture flourished and living standards rose. Sadly, land-hungry settlers fomented the great land wars of the 1860s with subsequent disenfranchisement and disillusioning of Maori causing a great many to abandon the Christian faith. 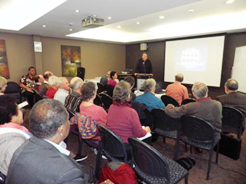 During the afternoon of the first day, everyone joined the Wellington congregation in worship services. Rod Matthews (Australia) gave the sermon, drawn from the story of Jesus meeting with the Samaritan woman at the well (John 4). This extended the weekend’s theme, confirming that God uses the most unlikely evangelists and methods to further the work of the gospel.

Louis Smith (Wellington) began Sunday’s sessions with a thoughtful reflection on the transformation necessary in Peter’s life before he could preach to Cornelius’ household (Acts 10), and the adjustment challenges that must have caused for both Jews and Gentiles. Next, Dennis Richards (Palmerston North) provided a visual presentation of results from a “Core Values Audit” and discussed several of the implications for future directions. David Wong (Auckland) then summarized and wrapped up some of the threads of the weekend’s discussions, emphasizing how individual spiritual health and maturity is essential to GCI’s part in the New Zealand mission field. The afternoon finished with Rod Matthews leading in communion.

It was a joyous and thought-provoking weekend of discussion and interaction. Much remains to be done, however. Please pray that appropriate and timely initiatives will emerge, so that we in this land will better understand and fulfill “GCI’s Part in Aotearoa New Zealand.”

Van Thawm Lian has completed the translation and editing of our basic 10-lesson course in Christian beliefs, called Discipleship 101 on our website. It was Van’s goal to print 2000 copies–enough to meet the expected demand from pastors and Christian church leaders in northern Myanmar. Our New Zealand church board provided NZ$2,000 to meet this goal. We are grateful that we’ve been able to achieve another target in creating tools to assist the spread of the gospel and the making of disciples of Jesus Christ in Myanmar.

As with so many projects in which we are involved in the Asia/Pacific area, we are sowing seeds where we may not see the results immediately, but others will harvest in due course after God gives the growth and the Holy Spirit touches the hearts and minds of people across this fertile land where the majority have grown up in the Buddhist religion.

One thought on “Update from Asia and the Pacific”