This update is from Rod Matthews, mission developer for GCI in Southeast Asia.

Nepal (see map below, click to enlarge) is regarded as the country with the fastest-growing Christian church in the world. 82% of its over 31 million residents are Hindu and perhaps 3% are Christian. The introduction in 1990 of a multi-party democracy brought a lessening of hostilities towards Christians although it’s still a challenging place to be involved in the work of taking the gospel to the people.

In March, my wife, Ruth, and I, along with our Southeast Asian pastoral coordinator, Wong Mein Kong and his wife, Chew Yeng, travelled to Kathmandu to visit our ministry partner there, the Himalayan Gospel Church (HGC), led by Deben Sam. As summer comes to Nepal, Deben has to make the most of the warmer months and takes trips to visit the rural congregations in the mountainous areas along the southern slopes of the Himalayas. So just prior to another of his trips, we had to squeeze a lot into a few days in Kathmandu. 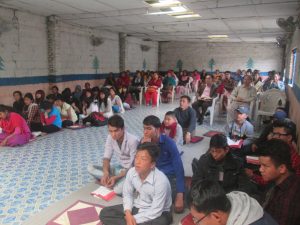 On Saturday, March 12, we joined the Kathmandu congregation in their weekly worship service (see picture at right). Saturday is the day off from work for everyone in Nepal and all churches meet that day. About 80 people worshipped in the church’s facility, built on rented land. It consists of a U-shaped structure with a meeting hall, children’s room, kitchen, office, library, other rooms for guests, and restrooms.

Wong Mein Kong and I gave short sermons translated into the Nepali language by Deben’s brother-in-law, Raju, and Pastor Joseph. It was a delight to participate in the service, listen to the singing, and join in the offering which includes fresh food items donated to help the widows and very poor. 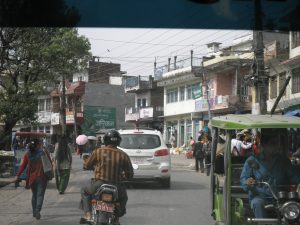 I had asked Deben if he could arrange a trip to a congregation outside of Kathmandu to expand our experiences and get a better feel for what the Holy Spirit is doing through HGC. We settled on a visit to the town of Manahari, about 120 km (75 miles) to the southwest of Kathmandu (pictured at left). Deben said that there was a new road in that direction that would cut down our travel time to less than 6 hours. I quickly discovered that I had added some built-in assumptions to the term “new road”!!

We left Kathmandu at 6 am “to avoid the traffic” – again a relative term. We wound our way out of Kathmandu on a narrow though sealed road passing through villages perched on the side of steep hills, with spectacular scenery in the morning mists – up to hovering peaks above us and down to rocky river beds hundreds of feet below. There was no safety barrier most of the way. 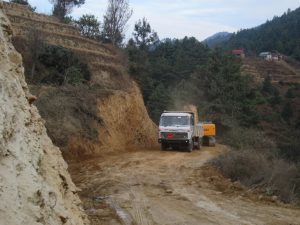 Then we reached the “new” road (pictured at left). It was so new that, in places, it was still being rebuilt, which added some further delays to the trip. The road was rocky with a deep layer of fine powdery dust. The rock was crumbly and subject to landslides, not helped by the earthquakes and after-shocks of last year, still being cleared away. Our four-wheel drive vehicle bounced and slithered around. So did we, inside. Some trucks and motorcycles, and even a few courageous cars were negotiating the road in both directions. I’ve been on some bad roads in my time, but this was a prize-winner! 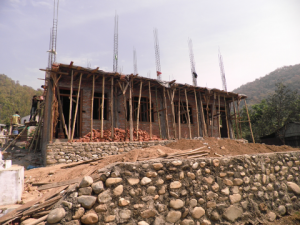 We finally arrived in Manahari just before midday, and met the local pastor and his wife, who support themselves by running a small grocery shop in the main part of the town. The local church was in the process of constructing a building (pictured at left).

We learned that it was to be large enough to accommodate about nine orphans that the church is already caring for, and their guardians. The pastor from a church some distance away had come to Manahari to meet Deben and us. 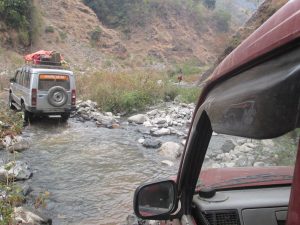 Soon it was time to head back to Kathmandu, and I can’t say I looked forward to that road again. But the driver decided he would take an alternative way. Surely, it couldn’t be any worse, we thought. About 90 minutes out of Manahari, we turned off the established road and, literally, took a river bed instead (pictured at right). It was nothing but a track, but we were not alone—there was a row of four-wheel-drive vehicles winding along the valley, through scrub-land, over rocks, and fording the stream numbers of times. Another marvelous experience – a bonus off-road adventure that gave us a taste of the real Nepal.

On Monday, we visited the medical clinic that serves the very poor that the HGC has been running for about 10 years with support from GCI in the US and Australia. It was established to provide free medical consultations and medicines to people working in the brickyards and on the streets, focusing mainly on mothers and children. It was established simply to be a tangible expression of the love of God for the most disadvantaged of people, but over time some have asked why we offer a free service. A few have become church members as a result. 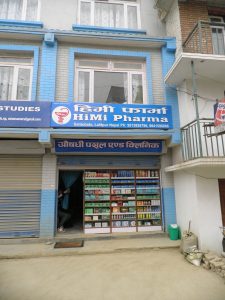 The owners of the original clinic location needed to utilize the site again after the earthquake last year, so Deben had to look for a new location.While he was doing so, Deben took the opportunity to assess its long-term future. To survive in the long term, the clinic needs to be financially self-supporting. So he has moved it into an urban area in the location shown at left.

Convenient to those shopping nearby, the clinic charges for medicines and consultations. It will also serve as a base for a mobile clinic which will take medical services even closer to those in need than before. It is Deben’s plan that eventually the income generated by the clinic will fully support the mobile services for the poor. In the transition, GCI will continue to fund it as we are able. 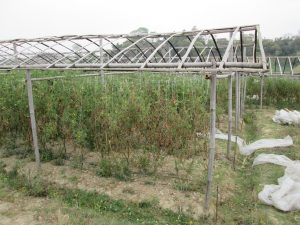 We also visited Deben’s farm (pictured at right) where he provides land so the poor people can raise tomatoes to sell to support themselves and the church. Deben also has a farm animal facility, which financially supports his extended family, including the 15 orphans from rural areas who live with him (pictured below). Deben mentioned that after the tragic earthquake of April last year, he found numerous children in rural areas where there are HGC congregations who had lost at least one parent in collapsed buildings, and that HGC is providing various forms and levels of support for another 80 children. 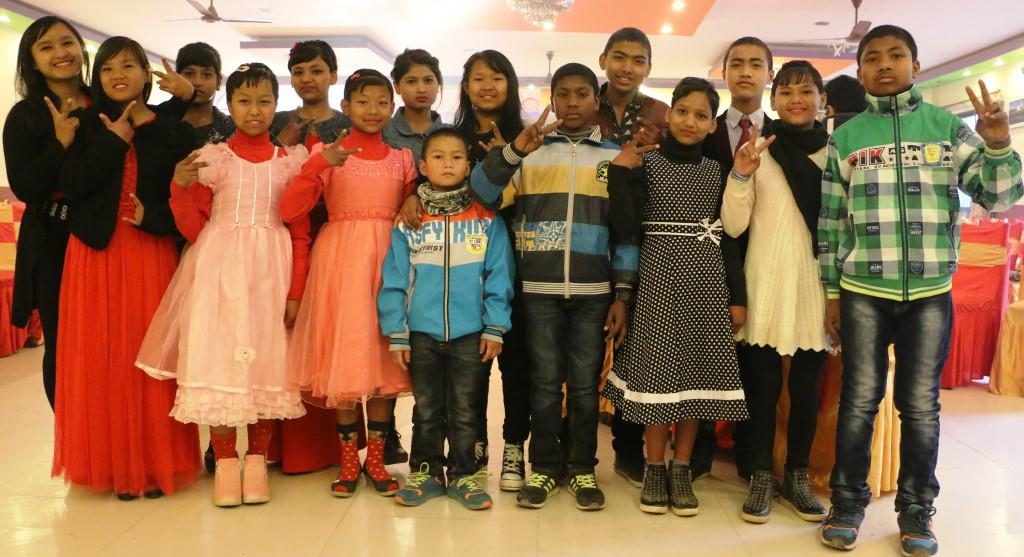 On Tuesday, we had the privilege of visiting the Himalayan Bible School (HiBiS) in session. Twelve men and women had been chosen from the locations where his mobile Bible school had conducted sessions last year in rural villages, to attend a three-month intensive course of Bible and Pastoral education in Kathmandu. It runs from February to May each year. Afterwards the participants go home with a small stipend to help support them for nine months while they use what they have learned in support of a local congregation and in community evangelism. Ultimately, Deben hopes to have the resources to hire a few of these graduates for full-time service in ministry in rural Nepal.

Nepal is an exciting and exceptionally challenging country in which to be part of Jesus’ ministry. One of the congregations in the northwest that Deben visits necessitates a 12-hour bus ride, followed by a one-hour plane ride and then three days of walking. Even places close to Kathmandu are not easy to reach, and Kathmandu itself is still recovering from the severe earthquakes of 2015, with much greater needs still outstanding in the regional areas. Doors are open everywhere you turn, and ministry has to be a matter of priorities according to the gifts and resources God gives to each part of the body of Christ.

We deeply appreciate the partnership God initiated between GCI and HGC, and the vision, sound management and courage to take up new opportunities that Deben brings as leader of a wonderful team of people. I know they all appreciate your prayerful support of the work God is doing in Nepal. As the former principal of Nepal Ebenezer Bible College, Rev. Manoj Shrestha, explained in an address at Calvin College (Grand Rapids, Michigan) last year, the gospel has reached “the highest point on the earth [Mount Everest in Nepal] from the lowest point on land on the earth [the Dead Sea].”

Note: Your financial support of Grace Communion International allows the denomination to support Rod Matthews and other Mission Developers so that they can connect with people around the word who are interested in learning more about Jesus’ love for them. Thank you for sharing so that others are blessed.

One thought on “Spreading the gospel in Nepal”