Some years ago while visiting the British Museum, I was deeply impressed by a beautiful statuette (pictured below) made of gold, copper and shells. Archaeologists from the British Museum and the University of Pennsylvania uncovered a pair of these statuettes while working jointly on an excavation at the Royal Cemetery of Ur in southern Iraq. Supervising archaeologist, Sir Charles Leonard Woolley, named them Ram in a Thicket—a phrase taken from the Genesis 22 story about Abraham’s willingness to offer Isaac in sacrifice to God.

A story of faith

The Genesis 22 story is typically explained as God testing Abraham’s faith and obedience (with Isaac’s obedience also noted). Though there is disagreement on some of the details, it is a key story in the flow of the Bible. Both the apostle Paul and the author of Hebrews present Abraham as a model of faith, with Hebrews interpreting the Genesis 22 story as a type, prefiguring the atoning sacrifice of Jesus:

By faith Abraham, when he was tested, offered up Isaac, and he who had received the promises was offering up his only begotten son; it was he to whom it was said, “In Isaac your descendants shall be called.” He considered that God is able to raise people even from the dead, from which he also received him back as a type. (Hebrews 11:17-19 NASB)

Some skeptics and atheists see the Genesis 22 story as proof that God is a moral monster. But in drawing that conclusion, they are overlooking a key point in the story. Having taken Isaac and two of his servants with him on the trip to Mount Moriah, Abraham ordered his servants to wait behind while he and Isaac ascended the mountain. He told them, “We will worship and then we will come back to you” (Genesis 22:5, italics added). Note that Abraham said both he and Isaac would return. Abraham was not lying—he had faith God would intervene. Like Moses after him, Abraham knew that the Lord, rather than being a moral monster, is “the compassionate and gracious God, slow to anger, abounding in love and faithfulness” (Exodus 34:6).

How did Abraham know this? He no doubt remembered what God had done several years before to make Isaac’s birth possible by intervening in the barren womb of Sarah. Knowing God’s love and faithfulness, Abraham trusted God to intervene once more. The story continues:

Again, Abraham was not lying—he was trusting God to intervene and Abraham’s words no doubt encouraged Isaac’s obedience when the time came for him to be bound and placed on the altar of sacrifice.

The angel of the Lord called to him from heaven and said, “Abraham, Abraham!” And he said, “Here I am.” [The angel] said, “Do not stretch out your hand against the lad, and do nothing to him; for now I know that you fear God, since you have not withheld your son, your only son, from Me.” (Genesis 22:11-12 NASB)

Looking up, Abraham saw a ram caught by its horns in a nearby thicket. The ram was provided by the Lord as a substitute for Isaac (Genesis 22:13). In response, and no doubt with gratitude, Abraham called the place “The Lord Will Provide” (Genesis 22:14). This amazing scene unfolded on Mount Moriah, a name meaning “seen by Yahweh.” Seeing our need as fallen humanity, God showed through this incident his faithfulness as the God who provides—the God who meets our need for salvation through “the Lamb of God who takes away the sin of the world” (John 1:29). In Jesus, God has provided the only sacrifice needed for us to be in eternal, right relationship with him.

Though Abraham apparently did not understand the details of what God had planned concerning the sacrifice, we know he trusted God to preserve Isaac’s life. Though his faith was perhaps small, nevertheless Abraham acted in faith, trusting God to be faithful. As a result, Abraham’s story of faith was incorporated into the lessons God taught Israel—lessons passed down through the years to us. Predominant among those lessons is that the sacrifice God wants from us is that of the heart—a willingness to give up our distrust and unbelief and count on God to provide the way into fellowship and communion with him, even when we can’t see the way forward. Abraham taught us well, and that’s one reason he is called the father of the faithful.

The story of Abraham and Isaac on Mount Moriah is prophetic, prefiguring God the Father sending his Son. In fulfillment of the sign of Abraham and Isaac, God the Father offered up his only Son in sacrifice for us, not withholding him. Then, adding a second twist to the Abraham-Isaac story, he brought Jesus back by raising him up from the dead. By giving himself to us in his Son, God provided himself as our One True Sacrifice—our One True Offering and restored us to right relationship and communion with himself. Jesus is God’s own total Provision for us all.

Trusting in the faithful God who provides,
Joseph Tkach

PS: For GCI.org articles about the faith of Abraham, click here and here.

CAD Director Greg Williams recently conducted an “intensive” (short-term, on site) version of the Ambassador College of Christian Ministry (ACCM) class, Jesus and the Gospels. Here is his report.

It was my pleasure to be in Dallas, Texas, to lead 17 highly-engaged students in taking ACCM’s Jesus and the Gospels class. This two-day-long “intensive” was a journey of learning, sharing and centering our lives in Jesus. We explored Jesus’ life, death, resurrection and ascension, and reflected on the method and message of his teachings in the four Gospels. We also gave attention to good principles of biblical exegesis in order to discover Jesus more deeply and personally as “The way, the truth and the life”—the One who came in human form to not only show us the Father, but to unite us with the Triune God. Here are pictures from the class, along with comments from a couple of students.

The format of the class was very relational, giving us opportunity to learn together. The students bonded quickly. The readings before the class gave us a good foundation and then following the class we will be completing an assignment that we’ll submit to our instructor. This “intensive” format is a great way to learn. I recommend ACCM’s intensive classes to anyone who wants to experience shared learning.

I liked the interactive format, which gave us a classroom setting without missing much time away from family and work. The class was very enriching, concentrated, and of great quality. It helped me dig deeper into my life and my understanding of God. I found myself craving to learn and understand more on an intellectual and practical level. The class helped me learn to be a more effective leader in ministry—learning from the other students broadened my thinking. Joining with others from all over the country, to join with Jesus in learning more about God, was very inspiring.

Last week in this section of Weekly Update, we looked at how we can teach the members in our congregations to be more effective in welcoming visitors to church. This week we continue that theme, noting that in an increasingly impersonal world, people hunger for true, lasting friendships. Ask yourself, Is my congregation a place where visitors find new friends? Though many churches are friendly to “insiders” (existing members) fewer by far are skilled at befriending “outsiders.”

For some helpful, practical advice on this topic from small church expert Karl Vaters, click here. 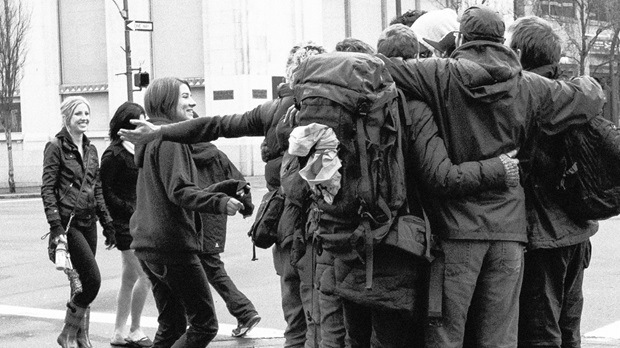 Thanks for your prayers for GCI-USA Regional Pastor Paul David (PD) Kurts. As noted last week, he became seriously ill due to complications following an appendectomy. It took two additional surgeries and continued hospitalization to resolve those complications, but we’re happy to report that he is doing much better, now convalescing at home.

I’m now home from the hospital after 23 nights in the hospital, 22 pounds lost, three surgeries, six CT scans and countless stomach and chest X-rays. This has been one of the most difficult trials of my life. On several occasions I didn’t know whether or not I’d make it out of the hospital alive, but through it all Father, Son and Spirit have reminded me that his grace is sufficient in all things and at all times. I’ve also gained a new and profound appreciation for those who endure serious illness and long hospital stays. I must say I never really knew. Your phone calls, cards, texts, emails and visits have meant so much. Though I’m not on Facebook, my wife Emma Lee has shared your posts with me, and those have been extremely encouraging also. You’ve reminded me once again why I love our church so much. As the song we used to sing goes, “We are family,” and when one member suffers we all suffer. I ask for your continued prayers through my recovery phase. It will be a long haul, but by his grace I’ll get there.

Now Emma gets to fatten that boy back up… She has been such a loyal trooper in this but she is exhausted as you can imagine. Please pray for her and their two boys. All I can say is “Thank you Jesus and all praise, glory and honor go to you our dear Brother and Savior.”

We are pleased to announce that Laurent Poyrault, who provides voice-overs for the French version of Speaking of Life, has wed. Laurent and his bride Catherine are now enjoying a honeymoon cruise on the Seine River. Congratulations to them both!