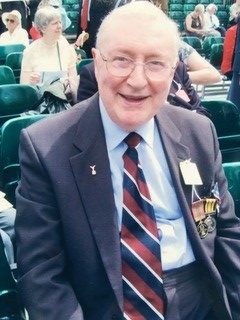 Mark McCulley, our pastor in Denver North, and his wife Joanne are sad to announce the death of Joanne’s father, Stuart Powell, at the age of 86 after several heart attacks. Stuart had a long and varied career, including serving in the Royal Air Force in Africa, graduating from Ambassador College Bricket Wood, serving as an elder and pastor in England and Scandinavia, and owning several businesses before and after his ministerial service. His wife Joyce passed away in 2011, and he had been cared for by Joanne, who flew from America several times a year.

Stuart was a bibliophile and lifelong learner, often studying deeply into topics of interest, giving talks on angels and the RAF for various charities, as well as hundreds of sermons. He was well known for his love for his Savior and his personal warmth and sense of humor. He had been attending and serving in Skipton Baptist Church (SBC) the last ten years as his health made it impossible to attend the nearest GCI congregation in England, and he was much loved there, but his love for the people he had known and served for so long never died. SBC is honoring Stuart by assisting us with arrangements for an online funeral for Stuart on Saturday, May 23.

5 thoughts on “Death of Stuart Powell”