Superintendents from the 6 regions around the globe gathered February 13 – 16 for meetings via a cabin retreat on Lake Norman near Charlotte, NC. Unfortunately, only 3 (Gavin Henderson – Europe, Michael Rasmussen – North America & Caribbean, and Heber Ticas – Latin America) of the 6 were able to be there in person but thanks to technology the remaining 3 (Eugene Guzon – Asia, Kalengule Kaoma – Africa, and Daphne Sidney – Australasia) were able to connect via Zoom for all our meetings. Mat Morgan (CFO) joined via Zoom. Michelle Fleming (Communication Director) and Cara Garrity (Development Coordinator) were able to be in person at the lake house to give presentations on Media and Development.

The last time that all 6 had been together was in November of 2019, just a few short months before the infamous Covid-19 hit the world. As much as everyone wanted to be together in person, this was the next best thing. We began our meetings at 7:30 a.m. each morning to accommodate the vast array of time zones represented (some as much as 15 hours difference), so when those of us at the cabin were gathering early in the morning, it was late afternoon and late evening for those connecting via Zoom.

Our cabin at the lake had one entire wall of windows. During one of the meetings several of us (me in particular) were distracted by a bald eagle that flew into a tree eating his large fish. We had to explain to those on Zoom what was happening and why some of us had gotten up to watch more closely. At the end of our time together, we enjoyed taking communion looking out over Lake Norman.

Even though we were miles apart, we were still able to have great interaction during our meetings and even had some catch-up time before and after. For those meeting in person, we had lots of time to build deeper relationships and encourage one another on our different journeys both in the workplace and personal lives.

When we set the dates, we did not figure in the Super Bowl game. A couple people were diehard fans, and some were just ok with sitting around and chatting. We even had a chart on who would win (Gavin did quite well considering he got his answers from the internet).

During our down time, we had the opportunity to play some rousing games of dominos, Phase 10, and Code Names. All the games brought lots of laughter.

We look forward to June 28 – July 2, 2023, when we will all hopefully be together for the Denomination Celebration. As this group of leaders continues to spend more time together, it is obvious that the Holy Spirit is moving through each of them as they lead in their respective areas the vision of healthy church. 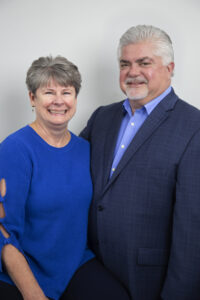