The following report is from Heber Ticas, District Pastor of Spanish speaking congregations in Southern California. It concerns the starting of a new church in Los Angeles as a satellite congregation of Comunion De Gracia, the GCI congregation that Heber pastors in San Fernando, CA.

Over the last three months God’s grace has been evident, as we have seen traction in the development of our new satellite church. God has blessed us with a dedicated leadership team that includes the Panamenos and Palacios families. Tony and Becky Panameno are talented musicians, and Enoc and Lourdes Palacios have pastoral experience. Enoc is a great preacher and Lourdes has worked with the Awana children’s ministry program for many years. These two couples have embraced our vision for kingdom expansion through church planting. They have joined with Jose Felipe Escalante and David Chicas (both from my district) in getting acquainted with my congregation and thus acquiring our “spiritual DNA.” Since our focus group in Los Angeles is similar to that of our “mother” church in San Fernando, we hope to replicate the good things that we have done in and through the mother.

Altogether, seven families have committed to the new satellite church: four recruited from outside my congregation and three from within. I have also given the green light to another three families that are attending in San Fernando, but live closer to the new satellite. Overall, we plan to launch with about 50-70 people in attendance (including six families that will be involved for only six months to help give us critical mass).

Our first preview worship service will be held on August 28 and a second one on September 25. On October 23, we plan an official launch with a grand opening service. Two small groups are already up and running in the focus group area, and are bearing fruit. A third one about 10 miles further south includes a family that already commutes to the San Fernando church. Our seven committed families are also in conversation with their unchurched friends and families living within a 15 mile radius.

We continue to pray for the guidance of the Holy Spirit in all that we do, and ask others to join us in prayer. 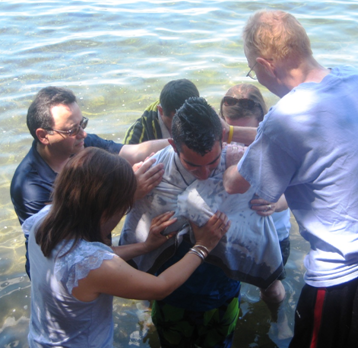 The camp welcomed Pastor Dennis Lawrence for a couple of days. Dennis (pictured at far right), who co-directs the camp with his wife Lynn Lawrence, was unable to attend full time due to health issues.

The camp’s creative staff invented several fun activities. One was a “clue” game where the theme was that the Ontario Camping Association was coming to do their inspection and the “Director” felt the best way to pass was to have questionable campers disappear! It was great fun. However, the most enjoyed activity was the camp chapels, featuring a wonderful worship band. Chapel messages followed the “Living Loved” curriculum developed by GCI-USA Generations Ministries. Each camp session ended with a banquet, awards ceremony and bonfire. Special recognition was made of the loss this year of one of our strongest camp supporters, John Ferlatte.

The following update concerning Marj Friddle is from her husband Jim:

Marj went in for a routine colonoscopy Monday, August 15. The doctor found a colon mass just above the appendix. This was a shock since there were no symptoms of a problem.

She was immediately hospitalized and scheduled for surgery on Tuesday. The doctor removed more than a foot of her colon plus her appendix and was well pleased with the outcome of the operation. She was in ICU until Friday night when she was moved to a room. She was placed on solid food on Sunday evening. I stayed with her most of the time she was in the hospital.

Marj was released from the hospital on Tuesday, August 23. We got the pathology report right before leaving. IT IS GOOD NEWS! The mass was definitely colon cancer and it was contained in the part of the colon which was removed. The surgeon removed 12 lymph nodes and all were clear! His recommendation is that no further treatment is needed. He also recommends another colonoscopy in one year and contact with an oncologist in case he might want to do blood work or other tests during the coming year.

We love all of you deeply and appreciate your prayers, love, concern, cards and e-mails.

We received many comments on last week’s video about the 87 churches that joined us in Mozambique, Africa. Here is another video, narrated by Tim Maguire, the GCI National Leader for southern Africa:

87 churches in Mozambique, Africa recently affirmed their affiliation with GCI. Here is a video telling the inspiring story (click the arrow on the picture below): 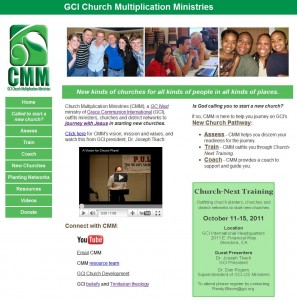 The new site provides a wide array of resources useful to church planters and to congregations and church districts that want to actively support the starting of new GCI churches. Many of the resources posted on the site are also useful in ministries within established churches. Check it out!

Retired GCI pastor, C. Fred Bailey, died at age 70 on August 3 at his home in Southaven, MS. The cause of death was apparently heart failure.

Fred was born on July 26, 1941. He graduated from Ambassador College in Pasadena, CA in 1973. Upon graduation, he married Diane Yoho. They entered the field ministry as a trainee couple in June of that year, serving in the Oakland and San Francisco, CA churches. In 1974 they transferred to Nashville, TN. They served their first full pastorate in Evansville, IN. They also pastored in Springfield, MO and Richmond, VA. Fred retired in 2004. Fred’s wife, Diane, preceded him in death in 2006. Fred and Diane ministered capably and faithfully in all the church areas where they served. They were respected and loved by all who knew them.

Marj Friddle, wife of GCI retired pastor Jim Friddle, had surgery this week to treat colon cancer. Her doctor told her that the cancer in her colon is apparently related to the breast cancer she battled in 2001. Please pray for Marj’s healing and for encouragement for Jim and the rest of the family. Cards and notes can be sent to:

Higher Ground, the GCI Generations Ministries camp in Swannanoa, NC just celebrated its 10th anniversary with a camp session that included 145 campers and 70 staff. The camp theme was “Oasis”, with chapel messages focused on how the Father, Son, and Holy Spirit are an Oasis of Love, Family, Friendship, Life, Light and Safety. The emphasis was on God’s love and purpose for all humanity, and how we first Belong, then Believe, and then Become. Here are a few quotes from participants:

“This was, by far, the greatest week of the year. I’m going to be telling Higher Ground stories for years to come!”

“From the first chapel, I knew this was going to be different. The message was clear and carried throughout the whole week – God loves you…NO MATTER WHAT!”

There were several memorable activities this year. One was a camp-side game of capture the flag. Another, involving the boys, was to watch Pastor Bill Winn working a forge – pounding red-hot metal into the shape of a sword. Sparks flew and burned brightly against the dark night as the boys remained completely silent. As the flames died down and the steel cooled, Pastor Bill recounted what the Holy Spirit did in shaping Jesus “blow by blow” during his earthly life and ministry. He then told them of a similar work the Spirit is now doing in their lives – shaping them into the fullness of what God has made them to be in Christ.

Enrollment for Higher Ground in 2012 is already full, though a waiting list is being kept. 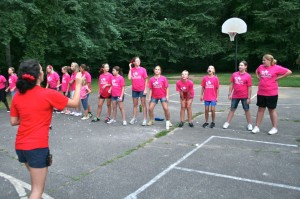 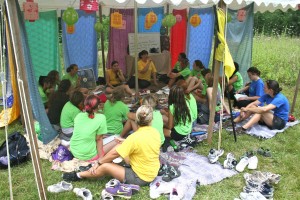 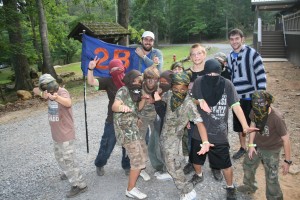 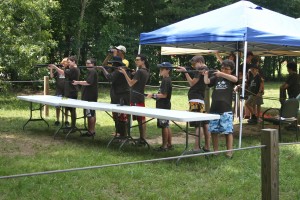