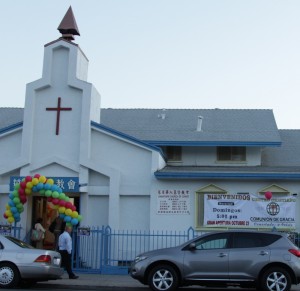 A recent report in GCI Weekly Update told of the work of our San Fernando, CA church in starting a new satellite congregation that meets in Los Angeles. We are pleased to report that this new Spanish-speaking congregation held its grand opening worship service on October 23. Here is a report from pastor and church planter Heber Ticas, with additional comments from regional pastor Lorenzo Arroyo.

I have been working over the past couple of years to put together a church planting team and plant a satellite church of my San Fernando congregation in the northeast area of Los Angeles. God has been faithful! This past Sunday [October 23] we held our grand opening. There were 165 people in attendance, including 63 from the mother church in San Fernando (helping provide the critical mass needed), Regional Pastor Lorenzo Arroyo (my coach), and Pastor Manuel Ochoa. The rest of the attendees were people from the community, and friends and family of the church plant team. We were amazed and surprised to see this many people coming as the result of our community outreach efforts. On the two Saturdays prior to the event, the team went out to nearby North Broadway Street and gave out roughly 800 free water bottles with a flyer inviting the community to the grand opening. 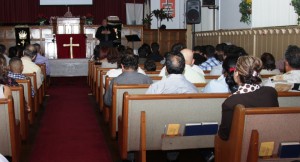 Our church plant team has grown to nine committed families, including my wife and myself, four that were recruited from outside of my congregation and the other five from within my church. They all show an intense enthusiasm for what the Lord is doing in our midst. We continue to push forward to live out the mission and stay true to our ministry process of connecting people to Christ, to one another and to his mission. We are looking to accomplish this as we continue to expand small groups, move believers to workers and continue to do missional outreach.

Your prayers are solicited and needed. We also ask you to pray that the Lord will provide the financial support that we need to sustain the ministry. We need to raise about $15,000 in the next six months to put us in a good position over the next 12 months. That is with everyone in the plant team graciously donating their time and resources for the kingdom. Thank you for all of your support and encouragement. We pray that God continues to bless us as we move forward and start planting the seed within the team, my district pastoral network and our Southern California church planting network for a third campus in the next three years. 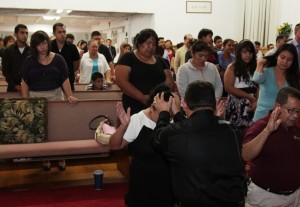 GCI pastor Manuel Ochoa and I arrived about 4:45 PM (15 minutes prior to the service). We had to navigate the city streets and surprisingly found a parking spot in front of the church building. After exchanging greetings with Heber and a few of the leaders on the street, who looked somewhat nervous, we decided to go in and hopefully find a couple of seats. It was about 5:00. In a sanctuary built for 150 to our shock there were not even 30 people present! Manuel and I took a couple of seats in the back and began praying. We thought, what if this is all there is? But again, this is a Hispanic community and our clocks often run on a different time zone. People began arriving, at first just a trickle – but as the band began playing, waves began to arrive and settle in their seats. By the time the service was in full swing (about 5:30) the place was packed from front to back and wall to wall. Praise God! It was just AWESOME! 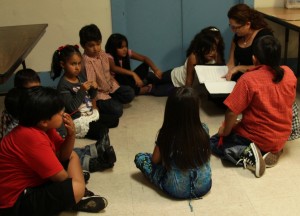 The music was upbeat and the attendees were jubilant. The sermon was inspiring and relevant to the needs of folks often trapped in city life. To hear of Jesus was liberating. Some 30 people responded to the altar call. It is truly a joy to witness the movement of the Spirit. Heber and his team put a lot of effort into making the launch the success it was. Even the day before, they were handing out water bottles and flyers, which brought a dozen or more new folks to the launch service in that one effort alone. They also are multiplying cell groups to accommodate new contacts they have made as well as sending cards, making calls and visiting homes. A new daughter has arrived. Praise God!

From the President
Church Development
Prayer & Updates
Subscribe to our Newsletter