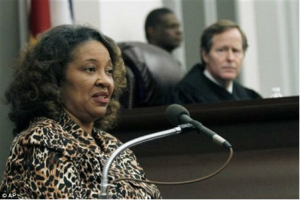 With the news media having a lot of tragedy to feast upon in recent weeks – the apparent slaughter of the innocents in Afghanistan, the ugly controversies swirling in Florida – there was one quiet, almost unreported, moment that can be seen as redemptive for the whole nation. A Christian lady stood in a courtroom in Jackson, Mississippi, and forgave the three killers of her brother, a man they had brutally murdered in June 2011.

Three young drunken toughs ran over and beat to death 48-year-old James Craig Anderson in an incredibly premeditated and despicable hate crime that seemed to come screaming out of the crypts of Mississippi’s darkest past. “Things have changed in this country,” offered one social justice activist, “but they haven’t changed as much as people think.”

This ugly reminder in Jackson was mitigated somewhat – indeed some say overwhelmed by – the merciful, Christian attitudes expressed by James Anderson’s family through the words of his sister, Barbara Anderson Young (pictured, left). After publicly thanking God for the peace and strength that he had granted James’ family in the past eight months, she opened with the astonishing words:

We ask that you not seek the death penalty for anyone involved in James’ murder…Our opposition to the death penalty is deeply rooted in our religious faith, a faith that was central in James’ life as well. [48-year old James worked for Nissan and sang in his church choir.] We also oppose the death penalty because it historically has been used in Mississippi and the South primarily against people of color for killing whites.

Those responsible for James’ death wantonly ended the life of a talented and wonderful man. They also caused our family unspeakable pain and grief. But our loss will not be lessened by the state taking another man’s life.

Ms. Young also added that her family was praying for peace in the family of the condemned killer and for “racial conciliation” in the South and the whole country.

It was quite a dramatic moment, a showcase without intending to be so of the best Christian virtues on public display in an ugly time for all of us. What a shame the media did not make this their lead story last Thursday.

5 thoughts on “A redemptive moment”