I was greatly saddened to learn last week that my dear friend and long-time colleague Bernie Schnippert had died (see the announcement linked at left). Please join me in praying for Bernie’s wife Arlene, for their daughters Crystal and Coral, and for the rest of the family. Bernie will be greatly missed, though we take comfort knowing that he is now free from pain and that we’ll see him again.

September is a busy month! In addition to back to school activities, there are celebrations of all sorts of things. In the U.S., September 15 is National Cheese Pizza Day and the first Monday of the month is Labor Day, which celebrates the achievements of workers and marks the unofficial end of summer. In Australia, a member of the Commonwealth of Nations, the Queen’s September birthday is celebrated with a holiday.

September also includes the Jewish festival called “Rosh Hashanah,” which in Hebrew means “the head of the year.” Among the traditions practiced by the Jews on that day are eating the head of a fish to symbolize the head of the year and greeting one another with “L’shanah tovah,” meaning “for a good year.” Tradition also correlates Rosh Hashanah with the sixth day of creation week when God made mankind in his image.

In the Hebrew text of Leviticus 23:24 the day is referred to as “Zikhron Teru’ah,” meaning “a memorial with the blowing of horns.” And so in English, the day often is called the Festival of Trumpets. Many rabbis teach that on Rosh Hashanah, a shofar (a trumpet carved from a ram’s horn) was blown a minimum of 100 times, including a series of 30 blasts indicating the hope of the Messiah’s coming. I have a shofar, and I can tell you it’s hard to make any sound when you blow into it. I’ve read that at Rosh Hashanah services, it was common to have a second trained person in the wings just in case the first one was unable to complete the task of blowing the shofar the required number of times.

Jewish sources indicate that three types of notes were blown that day:

Regarding Teruah, the Talmud says this: “When there’s judgment from below, there’s no need for judgment from above.” Rabbi Moshe Ben Maimon (known as Maimonides), perhaps the greatest Jewish scholar and teacher of the middle ages, adds this important qualification:

It isn’t enough that God is my King alone. If all humanity doesn’t recognize God as King, then there is something lacking in my own relationship with God. Part of my love for the Almighty is to help guide all people to an appreciation of Him. Of course this is largely an expression of my deep caring for others. But it also affects my own sense of God’s all-encompassing Kingship. 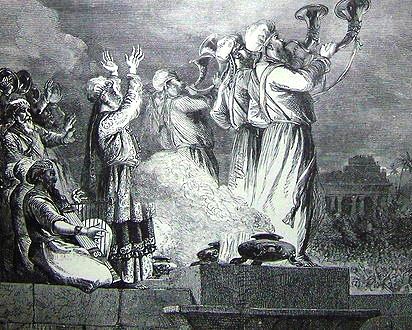 Ancient Israel initially used ram’s horns for their trumpets, but by the time of Numbers chapter 10, trumpets were typically made of silver. The use of trumpets is mentioned 72 times in the Old Testament. They were sounded for various reasons: to announce national crisis, to call the nation to solemn assembly, to make announcements, and as a call to worship. In time of war, trumpets instructed soldiers as to how to prepare for and then proceed into battle. Trumpets also announced the arrival of the king.

In our day, some Christians observe the Festival of Trumpets as a mandatory day of worship, often viewing it as pointing to future events—Jesus’ second coming or the rapture of the church. As well-meaning as these interpretations of the festival may be, they miss how it points to what Jesus has done already.

As we know, the old covenant, which included the Festival of Trumpets, was temporary, given to point people to the coming Messiah who is Prophet, Priest, Sage and King. The blowing of trumpets on Rosh Hashanah not only signaled the beginning of a new cycle of annual worship in Israel, it proclaimed the celebratory message, “our King is coming!”

For me the most meaningful element of the Festival of Trumpets is how it points to and is fulfilled in Jesus’ first coming through his incarnation, atoning ministry, death, resurrection and ascension. Through these “Christ events,” God not only fulfilled his covenant with Israel (the old covenant), but changed all time, forever. Jesus is the head of the year—the head of all time, especially since he created time. He is our tabernacle and we have new life in him. As Paul wrote, “If anyone is in Christ, the new creation has come: The old has gone, the new is here!” (2 Corinthians 5:17).

Jesus is the new (the second) Adam. He succeeded where the first Adam failed. Jesus is our Passover, our Unleavened Bread and our Atonement. He is the One (and only One) who takes away our sin. Jesus is our Sabbath in which we have rest from sin. As the head of all time, he now lives in us, and all our time is holy as we live the new life that is ours in union with him. Jesus, our King, our Lord and Master, has blown the trumpet once and for all!

Living in Him,
Joseph Tkach

One thought on “Trumpets: a festival fulfilled in Christ”