First, Koko (Granny) Maria Maphalle was baptized on 6 March 2022. The previous month, on her 100th birthday, she expressed her desire to her family, “My soul yearns for Jesus. I want to be baptized before I die.” She has lived her entire life in the dusty village of Morudji in one of the most picturesque parts of South Africa, Tzaneen—an area with hot summers, mild winters, and an abundance of water. The area is decorated with beautiful mountains and valleys covered with greenery. All manner of fruit trees grows wild in the fertile soil.

Koko Maphalle attends the GCI Morudji congregation with her grandchildren and great grandchildren. She was baptized by Pastor Thabo Mahasha, who pastors the Morundji and Moleketla congregations. Members from both churches attended the baptism celebration, where Koko Maphalle’s mood was described as euphoric, and she could not stop singing and praising God!

Second, a week later, we celebrated the ordination of Pastor Rosinah Rapetsoa on 13 March 2022! She was ordained an elder and commissioned as the bi-vocational pastor of the GCI Polokwane church by Pastor and District Superintendent Caleb Makhela.

Third, in an uncanny turn of events, another Koko baptism took place on the same day—this time of a nonagenarian. Koko Paulina Ledwaba, 91 years old, is house-bound and lives next door to Mary Mohale, where the Polokwane church meets. On most Sundays during the service, she could be heard shouting from her house, “Amen” and “Hallelujah!” At her request, the pastor and other members visit to pray with her occasionally.

Earlier in the week of 13 March, Koko Ledwaba fell seriously sick. Her family was worried that they were going to lose her, so they called a member they had befriended and asked for prayers. Thankfully, her situation improved.

On the next Sunday, Koko Ledwaba sent a message requesting to be baptized! After the church service and Pastor Rapetsoa’s ordination, the church members proceeded next door to Koko Ledwaba’s house for the baptism. She was baptized amidst great singing, praying, and celebration. 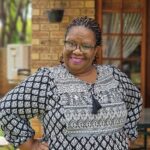 2 thoughts on “Three Reasons to Celebrate—Republic of South Africa”