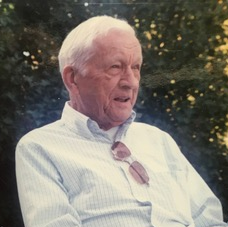 Carmon “Mac” McCulley, father of Denver North pastor Mark McCulley, died on March 1, 2022 aged 99. He was born on a farm in central Tennessee in 1923, the first of four children. He moved to Nashville before being drafted into the Army where he served in the Signal Corps toward the end of WWII in Okinawa. After the war, Carmon and his new wife Doris settled in Wichita, KS where they raised seven children. He worked as a mail handler for the railroad, then as a machinist, including at the Coleman Company for many years. After retiring, he volunteered at a local hospital, and developed friendships with several of the doctors serving there. He and his family were pioneer members of WCG in Wichita, and Carmon was an avid student of the Bible all his life.

Doris died in 1975, and Carmon remarried, later saying he felt blessed to have been married to two great loves. His second wife, Sue, passed in 2019. He leaves seven children: Carma Ellen Aschenbrenner, Brenda Williams, Timothy McCulley, Mark McCulley, Paul McCulley, Laurie McCulley, and Leah David. His graveside service in Wichita was attended by many old friends and admirers, his seven children, several of his 16 grandchildren, and several great-grandchildren.

Cards may be sent to:
Mark and Joanne McCulley
9246 Ingalls St
Westminster, CO 80031

3 thoughts on “Death of Carmon McCulley”