I am reminded of a funny story about three boys, an old man and a cemetery. Its message is relevant to the Advent season.

On the outskirts of a small town was a large cemetery, surrounded by a tall wrought iron fence. Just inside stood a large pecan tree. One evening, two boys entered the cemetery with buckets in hand. They sat down beneath the tree and began dividing up the pecans that had fallen to the ground. “One for you and one for me” they could be heard proclaiming loudly as they took turns dropping pecans into their buckets.

On the way in they had seen many pecans scattered around the cemetery, all the way to the fence line. So after collecting pecans near the tree they started moving out to collect those that had fallen in the direction of the fence. Soon another boy came riding by on his bicycle. As he passed, he heard voices and stopped to listen. He heard being repeated over and over: “One for you and one for me.” He thought he knew the meaning and jumped back on his bike and rode off.

Soon he encountered an old man hobbling along with his cane and stopped to tell him what he had overheard in the cemetery. “Come quick,” he said, “you won’t believe what I just heard! Satan and the Lord are down at the cemetery dividing up souls!!” The man replied, “Beat it kid. Can’t you see that it’s hard for me to walk?”

As the story goes, the old man with the cane made it back into town five minutes ahead of the boy on the bike!

That’s a funny story, but it’s based on a faulty premise. Contrary to popular opinion, Satan and Jesus are not equals battling away to see which souls on earth they can claim as their own. Satan is a vanquished foe, even if God allows him some continuing activity in a world over which Jesus is supreme Lord. Satan’s present activity suits God’s purpose in the time between Jesus’ bodily ascension to heaven and his future return to earth in glory. In between, Jesus is present in our world through the Holy Spirit, declaring his Lordship and calling people to yield in faith and joy to his present kingdom rule on earth and in heaven.

During Advent, we celebrate our Lord’s “comings” – the glorious truth that he has come, he will come, and he is coming. May we, the body of Christ, together discern what he is now doing in our midst and through the Holy Spirit join in!

Advent greetings from my family to yours,

A Pastoral Team Conference for GCI Northern Luzon pastors and ministry leaders was held November 12-17 at the Asia Pacific Theological Seminary in Baguio City, Philippines. Immediately after a welcome worship, updates and denominational focus were discussed by Eugene Guzon, GCI National Director. He also exhorted the pastors about the theology of “abiding and abounding.” Rex Dela Pena then explained the “sense of call” into the ministry as well as “ministry weariness and burnout.”

On the second day of the conference, the pastors were led in an overview of the GCI Church Administration Manual. Other matters regarding the financial statement of the church were also reviewed. The conference concluded as participants joined the Baguio City church for worship services.

The following report is from Glen Weber who serves as senior pastor of New Hope Christian Fellowship, a GCI congregation in the Pasadena, CA area, and one of GCI’s district pastoral leaders in the Western United States:

My wife Connie and I were recently vacationing in Hawaii. During our time there we visited Light of the World, the GCI congregation in Honolulu. It was a blessing to spend time with our members there, including Pastor Gary Crowell and his wife Risa.

Although Light of the World once numbered only about 12 people, it now has about 50. Virtually all the new members came to the congregation through outreaches focused on military veterans. The picture at right shows their praise band participating in one of those outreaches, which included a worship service and a meal. Most of the members of the praise band are former clients of a local veteran’s recovery program. They now share their faith with fellow veterans by providing worship music for veteran’s recovery meetings. They can be found most Tuesday nights rocking out at the U.S. Veterans Initiative.

The following report is from Kalengule Kaoma, GCI Mission Developer in Central Africa:

James Henderson (GCI national director in the UK) and I were in Accra, Ghana in November for a West Africa leaders’ conference. Around 200 GCI church leaders from Ghana, Nigeria, and Togo attended the conference (see group photo below). With the theme of pastoral/ministry development based on 2 Timothy 2:15, the conference had several subjects including Relevance of a Pastor in the Community, Trinitarian Theology – A Scriptural Discussion, The Revelation of the Father, Bearing the Father’s Name, Armageddon, and Jesus the Great Shepherd. In addition, national leaders updated the audience about what Jesus is doing in their respective countries.

On Sunday, James Henderson spoke to the combined church at Kutunse, the conference venue in Accra. I went to Buduburam church and ministered there.

Prayer point: There is need for more future regional conferences. 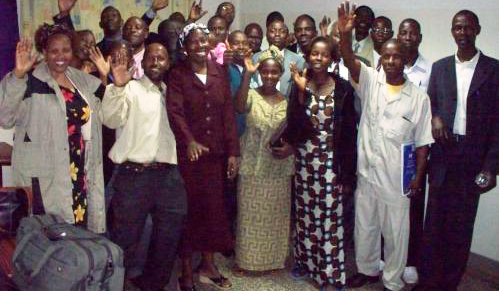 After Ghana, I travelled to Nairobi Kenya for the East African conference. Forty GCI leaders from Uganda, Tanzania and Kenya attended the conference (part of the group is pictured at right). Running a similar theme and topics as the Ghana conference, the Nairobi conference ran for two days. Some of our newly affiliated groups in Kenya and Tanzania also participated.

After the conference, Kimani Ndungu, area pastor for East Africa and Anthony Gachanja who is national ministry leader of Kenya were invited to conduct further training for our new groups Tanzania and Nyanza district, Kenya.

Here are two videos that might be helpful in Christmas-themed Bible studies or youth Sunday school classes:

The Story of Christmas – An Animation from Grace in Cranberry on Vimeo.

We are saddened to report the death of long-time GCI member Victoria Marie Lee, 86, of Hammond, LA.

Marie was preceded in death by her husband, John H. Lee, of Baton Rouge, her parents, Everett and Lela Wyatt of Gainsville, Texas, and her sisters, Helyn Coe of Conroe, Texas and Billie Jo Nokes of Midland, Texas. Marie is survived by her daughters and their husbands, Sandy and Dave Orban (Dave pastors GCI churches in Texas) and Pam and Mike Horchak (Mike pastors GCI churches in Louisiana and also serves as a GCI district pastor), five grandchildren, and six great grandchildren.

Notes of condolence may be posted on the funeral home website at http://www.resthavenbatonrouge.com/guestbook.asp?page=guestbook&id=21336&locid=36 or sent to Marie’s daughters:

A group of missionaries from GenMin’s Crossing Borders ministry are leaving on Friday, December 9 for a weekend trip into Mexico. The group will visit two colonias (very poor neighborhoods) and one children’s home where they will distribute 400 shoebox gifts (most donated by GCI members from about a dozen different U.S. congregations), to sing Christmas songs, to share an Incarnation message, to cook and feed the kids, to play and show the love of God.

After the shoebox trip ends, four of the group will fly south to visit Karen Salinas and her 16 foster children. The group last visited with Karen and her kids about 18 months ago when they lived in northern Mexico near the U.S. border. However, they had to move south due to border violence. Please pray for the group’s safety and that their ministry will be a blessing to many.

Here is an update to an earlier prayer request for Janna Jones from her father, GCI pastor Jim Kissee:

Janna and our son-in-law Nate are thankful for the many encouraging notes of support with prayers. Their daughter Lilah was born November 30! On December 5 both mother and daughter received a good medical report, despite the induced labor, which was necessary due to Janna’s thyroid cancer operation scheduled for December 13. Continued prayers for Janna are appreciated.

Lilah is settling in. She seems to like her new home. As you can guess, the whole family is rejoicing. We won’t believe how much Janna’s early pictures look like Lilah’s. This little girl, like her mommy, has lots of thick hair. What a joy!

Janna has a blog describing her journey while pregnant with cancer. Go to http://pregnantwithcancerwhat.wordpress.com/2011/10/11/pregnant-with-cancer-what/.

We’ll keep you informed. Thanks for the prayers and love.

Curtis May, director of the GCI-affiliated Office of Reconciliation and Spiritual Mediation, has been invited by the COPS (Community Oriented Policing Services) office of the U.S. Department of Justice to participate in a one day meeting focused on “racial reconciliation and police legitimacy.” The meeting, which will be held on January 11 in Washington, D.C., will focus on issues involving law enforcement and African-American communities facing challenges of violence, drug activity and high levels of criminal justice system involvement. Those invited to participate are police chiefs and other community leaders from a selection of cities that are focused on this issue.

Some GCI congregations need video sermons to fill in when live sermons are not possible. To help fill this need, GCI media makes video-taped sermons available online. A new one has recently been posted, titled Ministry and Mission in the Spirit. To download this sermon given by Dan Rogers at the 2011 regional conferences, go to http://www.gci.org/pastoral/wfos. New sermon videos are first posted for pastors on that webpage and then later on the public webpage at http://www.gci.org/media/word-our-sponsor.