The following report is from Lee Berger who directs the GenMin Crossing Borders mission team.

We returned recently from a mission trip to Mexico to deliver shoe box gifts. In several ways it was the most challenging of the 13 mission trips we have made into Mexico since 2005. 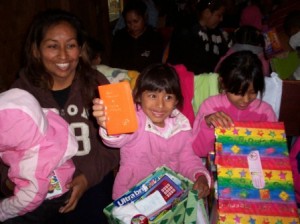 From churches and other groups across the U.S. we received almost 600 shoe boxes full of gifts, together with personally-knitted baby blankets, handmade pillows, infant supplies, custom-carved wooden cars, several boxes of nice shoes, bags of good clothing and other items. Finding space in the vehicles to transport these items across the border was both a challenge and a blessing.

Carol Meyer from Kansas City donated copies of “Project Renewal” (in Spanish), a book she authored about recovery from abuse (a common problem in Mexico). Truett Seminary at Waco University donated 100 books for training pastors. Generous cash donations allowed us to purchase many other needed gifts and resources for the pastors and ministry leaders with whom we partner in Mexico.

Our crossing into Mexico from Laredo, Texas on Saturday started well with visits to two churches to sing Christmas songs, teach about the birth of Jesus and hand out the shoe box gifts. However, it was raining hard and both of our team’s vans got stuck axle deep in mud at the second church. A tow truck was called but it got stuck too. Then the host pastor’s van and another vehicle got stuck. While some worked outside to free the vans, the rest of the Crossing Borders mission team and local church members prayed and visited inside the unheated church. Two young men who lived in nearby houses (we thought of them as our “Mexican angels”) worked hard to help pull out a couple of the vans. After four hours struggling in the cold rain and slippery mud, a truck from the fire department arrived to free the vehicles.

Our final stop of the day was supposed to be lunch served at the children’s home. Instead, it was supper. Soaking wet and cold in our muddy clothes, we visited with the kids for an hour and a half, distributed shoe boxes and provided the meal. Now well past dark, we headed back across the border to warm showers and our own dinner, thankful for the experiences and inspired by the patient and willing spirit exhibited by all. We had hand-distributed about 300 shoe boxes and left the remainder of the boxes in the hands of two of our Mexican ministry partners who delivered them to churches further inland.

I (Lee Berger), my mother Jean Berger, and Steve and Barbara Solari were scheduled to catch a flight the next day (Sunday) to Ciudad Victoria, Mexico, to take gifts to Karen Salinas and her 17 foster children. This was the first time we had ventured into interior Mexico. Once again, we encountered unexpected challenges. Our flight was cancelled on Sunday due to bad weather (no radar at the local airport), and then cancelled again on Monday.

In the meantime, we made ourselves useful assisting pastor Raymundo Rendon and his wife, Lisa. The Rendon’s kitchen stove (which they use to cook food for various feeding ministries) had stopped working. So we went stove shopping and also bought the Rendons a new set of tires to replace the unsafe dry-rotted ones on Pastor Ray’s car. Lee and Steve made a hospital visit with Pastor Ray one afternoon and prayed for a Mexican government official they had met on the previous summer trip. The group provided babysitting for the Rendons so Ray and Lisa could have a rare night out for their wedding anniversary. There was much brainstorming about ways the Crossing Borders mission team can assist Ray with ministry needs in the future.

On Tuesday, the weather was bad again, so we took the commercial bus to Victoria. We arrived in Victoria at about midnight, and Karen and several of the older children visited with us into the wee hours of the morning. We then had a busy day on Wednesday at Karen’s home, visiting with her foster children and hosting a party to deliver the gifts we had brought, including a bilingual Bible for each child. We prayed for each child and several gave moving testimonials. It is difficult to describe the close bonds we feel for these lovely children being brought up in the nurture of the Lord. Thursday was filled with playing with the kids and restocking the foster home with supplies purchased with donations from many supporters.

After an event-filled and challenging trip, we returned to Laredo on Friday and everyone was back home in the U.S. by Saturday, thanking God for an amazing trip full of unexpected obstacles that led to many wonderful opportunities to serve others on mission with God. We are now looking forward to our next mission trip to Mexico in June 2012. You can learn more about it at http://www.cbmission.org/.