I hope you are as excited as I am to read the reports from our youth camps (click on the link at left to read recent reports). At our camps, which are scattered around the world, thousands of young people are setting a course for life. This is vital, because so many young people today are growing up in a world of negativity, defeatism and failure. Our campers have lots of fun at camp, but it’s fun with a purpose. They learn first-hand about choosing to live life in relationship with God. 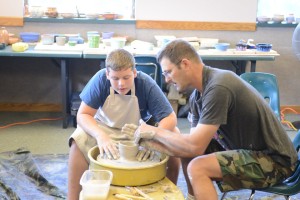 It’s sad that many young people don’t know about that choice. They grow up in an environment where knowledge of God is considered superfluous, even dangerous. Note Paul’s warning about that:

The basic reality of God is plain enough. Open your eyes and there it is! By taking a long and thoughtful look at what God has created, people have always been able to see what their eyes as such can’t see: eternal power, for instance, and the mystery of his divine being…. (Romans 1:20, The Message).

We hold our youth camps in areas of natural beauty, so everyone can have a “long and thoughtful look” at the creation, and thus learn more about the Creator. Sadly, many today deny that there is a Creator, attributing everything in our world to only natural, material causes. Paul warned of that danger:

People knew God perfectly well, but when they didn’t treat him like God, refusing to worship him, they trivialized themselves into silliness and confusion so that there was neither sense nor direction left in their lives. They pretended to know it all, but were illiterate regarding life (Romans 1:21-22, The Message).

I have followed with interest the research concerning human consciousness, including the topic of free will. As illustrated at right [1], some scientists believe that what we call “free will” may be little more than the “background noise” of neurons firing within our brains. One researcher put it this way:

Though purposeful intentions, desires and goals drive our decisions in a linear cause-and-effect kind of way, our finding shows that our decisions are also influenced by neural noise within any given moment. This random firing, or noise, may even be the carrier upon which our consciousness rides, in the same way that radio static is used to carry a radio station. [2]

Some neuroscientists have declared that, “Free will is an illusion.” They believe that our thoughts, decisions and behaviors are solely the products of impersonal biochemical processes operating within the brain and body. [3] But if they are correct, why accept as true what anyone’s brain comes up with? The problem with their declaration is that, rather than being scientific, it’s the outcome of philosophical assumptions that determine how relevant scientific data is selected and interpreted.

It’s interesting to note that a recent study concluded that when people are told that free will does not exist, their brains tend to follow suit. Subjects in the study reading passages discrediting the idea of free will experienced an immediate decrease in brain activity related to voluntary action. Other studies found that discrediting free will seems to trigger an increase in cheating and aggressiveness—encouraging people to be less helpful and generally sapping their motivation. It seems that embracing a purely materialistic understanding of free will causes people to become, as Paul wrote, “illiterate regarding life.” That’s why it’s so important that we give young people a solid biblical foundation.

The Bible tells us that God created us in his image and in his divine freedom, granted us freedom to discern the truth and the good and then act on it. God does not force his will on us—he does not absolutely prevent us from abusing our freedom and throwing it away. But as we surrender our wills to God and his will for us, a great work of renovation occurs—a process brilliantly described by C.S. Lewis in Mere Christianity:

Imagine yourself as a living house. God comes in to rebuild that house. At first, perhaps, you can understand what He is doing. He is getting the drains right and stopping the leaks in the roof and so on; you knew that those jobs needed doing and so you are not surprised. But presently He starts knocking the house about in a way that hurts abominably and does not seem to make any sense. What on earth is He up to? The explanation is that He is building quite a different house from the one you thought of—throwing out a new wing here, putting on an extra floor there, running up towers, making courtyards. You thought you were being made into a decent little cottage: but He is building a palace. He intends to come and live in it Himself.

Young people (and old) who understand this biblical truth will never be illiterate regarding life. I’m thankful that our youth camps are helping so many young people set a course for life that embraces the knowledge of God and his plan for humanity. My thanks to all who are making that possible!

Your brother in Christ,

[2] “Is Free Will an Illusion,” Pacific Standard, http://www.psmag.com/navigation/health-and-behavior/free-will-illusion-83861/.

3 thoughts on “Setting a course for life”