One reason I greatly enjoy the conferences in our fellowship is the opportunities they afford to share meals and conversation with people I don’t often get to see. At a recent U.S. regional conference, I enjoyed discussing Albert Einstein’s historic work with meteorological scientist Michael Anderson, a friend and GCI elder from Connecticut. I mentioned how I’m enchanted by Einstein’s well-known statement that “God does not play dice with the universe.” I also noted to him my amazement that Einstein’s predictions about our visible universe, made over 100 years ago, have been verified by science through empirical measurement.

One of Einstein’s predictions was that there are speed-of-light gravitational waves traveling through space. Einstein considered them too small to be measured and thus unverifiable.

Though Einstein was right about the existence of gravitational waves, he was wrong to think they would never be discovered. In fact, they were recently detected and measured by the Laser Interferometer Gravitational-Wave Observatory (LIGO) via its two installations in Louisiana and Washington. LIGO analyzed and merged multiple sources of light, using technology that is able to detect distortions one million times smaller than the width of a hydrogen atom. LIGO’s measurements suggest that these gravitational waves originated with a cataclysmic event in the primordial universe.

The realm of God

Given amazing discoveries like gravitational waves, some scientists wonder if there is a timeless dimension holding together our time-bound universe. Though the scientific community in general does not accept that idea, God’s revelation, centered on Jesus, tells us of a timeless dimension that the Bible refers to as eternity (I like to call it the realm of God). In musing on how something of that realm is revealed to us by God’s creation, David (who I imagine to be the first rap artist) wrote this:

The heavens declare the glory of God;
the skies proclaim the work of his hands.
Day after day they pour forth speech;
night after night they reveal knowledge.
They have no speech, they use no words;
no sound is heard from them.
Yet their voice goes out into all the earth,
their words to the ends of the world.
(Psalm 19:1-4)

Inner space and the limitations of science

Utilizing ever-more amazing technology, science continues to learn about the outer and inner realms of created space. Recently, scientists looked into the hidden recesses of inner space by examining what is left after smashing sub-atomic particles. With discoveries like this, some say humankind may be near the limit of what can be understood about the universe. Another friend and fellow GCI elder, John Meyer, alerted me to an article [1] featuring the work of Dr. Harry Cliff, a particle physicist at the European Organization for Nuclear Research. Dr. Cliff says we can’t go further in our understanding of the universe because “the laws of physics forbid it.”

Concerning what he calls “the two most dangerous numbers in the universe,” Dr. Cliff notes that if either was only minutely different, nothing would exist. The first number pertains to the strength of the Higgs field (see below), and the second with the repulsive force of the dark energy that accelerates the expansion of the universe. (I must interject a thought here: perhaps Dr. Cliff and others should ask where those two numbers originated and how they became firmly set in relationship with the universe.)

Following discovery of the Higgs boson—the so-called “God particle” [2] by a team of scientists (including Keith Baker, another friend and GCI member in Connecticut), attention turned to the Higgs field [3], the strength of which is a bit of a puzzle. When particles move through this field they gain mass and become protons, neutrons and electrons, which comprise all matter. The Higgs field runs on a constant, very weak energy level. As Dr. Cliff notes, “The Higgs field is just slightly on—it’s not zero, but it’s ten-thousand-trillion times weaker than its fully-on value.” This “weakness” defies current scientific understanding. (Could it be that many scientists engaging in the philosophy of science refuse to see that God has the Higgs field under his control?) 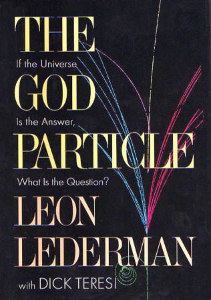 In The God Particle: If the Universe Is the Answer, What is the Question? [4], physicist Leon Lederman explains the discovery of the Higgs boson using a parody of the tower of Babel:

The issue is whether physicists will be confounded by this puzzle or whether, in contrast to the unhappy Babylonians, we will continue to build the tower and, as Einstein put it, “know the mind of God.” …The whole universe was of many languages, and of many speeches. And it came to pass, as they journeyed from the east, that they found a plain in the land of Waxahachie, and they dwelt there. And they said to one another, “Go to, let us build a Giant Collider, whose collisions may reach back to the beginning of time.” And they had superconducting magnets for bending, and protons had they for smashing. And the Lord came down to see the accelerator, which the children of men builded. And the Lord said, “Behold the people are unconfounding my confounding.” And the Lord sighed and said, “Go to, let us go down, and there give them the God Particle so that they may see how beautiful is the universe I have made.”

In reference to his second “dangerous number” (concerning dark energy), Dr. Cliff admits that science has extremely limited understanding. “The best idea,” he said, “is that it is the energy of empty space itself—the energy of the vacuum.” Noting that dark energy should be “10120 times stronger than the value we observe from astronomy,” he concludes that theoretical physics has a real and quite mysterious problem:

We may be entering a new era in physics. An era where there are weird features in the universe that we cannot explain. An era where we have hints that we live in a multiverse that lies frustratingly beyond our reach. An era where we will never be able to answer the question “Why is there something rather than nothing?”

It’s unlikely that physicists will break through these limits without expending massive amounts of time and money. The collider in Geneva used in discovering the Higgs boson likely is not up to the further discoveries necessary to verify as yet unverified scientific theories. But some theories seem to be, in principle, beyond scientific verifiability. For instance, in order to verify the theory of multiple universes (the “multiverse”) we would need to get outside of our own and exist in another universe where the physics of it would be incomparable with that of our own (since that’s what makes it another universe)!

Including God in our thinking about the universe

Why was Albert Einstein so advanced in his thinking? I believe it is because he included in his thinking the reality of a creator of the universe. Though some claim he was an atheist or agnostic, it’s clear that Einstein did not exclude God from his thinking the way many scientists do. His metaphor that God does not play dice with the universe continues to cut through mysteries concerning the universe that baffle many scientists. Yes, Einstein was not able to adequately describe God’s role in creating and sustaining the universe, but then, neither am I, except to say that I know God as creator of both nature and science, the latter being our ability to understand, at least to some extent, the wonders and mysteries of the created universe.

Natural science is fundamentally about discovery, which includes coming to realize that we lack explanations for many of the things we observe about the natural world. God, as yet, has not made these things known to us, nor has he allowed us, so far, to invent the means of research and development by which we may yet come to know. But more than that, if the original and continuing agency of the living God is essential to answering, Why is there something rather than nothing?, then the study of nature alone can never fully answer that question. This is so because God is not nature, nor is he a part of nature. As early church teachers such as Athanasius realized, Only God knows God and only God reveals God (see 1 Corinthians 2:11).

C.S Lewis put it this way: we should not expect to find the author of a book in the book of his own creation (although he could have written in something of himself as one of the characters of the book!). While nature seems to continually point beyond itself, the natural sciences are unable to go beyond their inherent limits to find answers to the kinds of questions they raise. The natural sciences require a higher level of explanation than they can ever deliver, since nature is not God, and science restricts itself to the study of nature.

Looking beyond the natural sciences to theological science

Acknowledging this limitation of science is important in that it helps us understand that if we are to have an ultimate explanation for nature (and for science itself), we will have to turn to a higher, more comprehensive level of explanation. Our study of nature (of inner and outer space in particular) has, seemingly, brought us to the point where we must recognize that nature raises questions that, in principle, science is unable to answer. Therefore we must look beyond the natural sciences to answer the very questions that this field of study raises.

In searching for answers we must examine theological science, which seeks knowledge from the study of the historical and personal revelation of God which comes through Israel and culminates in Jesus Christ, God’s ultimate self-revelation. Holy Scripture is the record of that revelation which affirms a kind of “multiverse,” consisting of two realms—the heavenly and the earthly. While we cannot exist outside our own universe and reach into another, we have received from that other heavenly “universe” of God his own revelation. The Author himself has broken into our universe and provided us the ultimate explanation for why there is something rather than nothing: the agency of our Triune God, who is the creator, sustainer and redeemer of this universe.

Amazed by God, his creation, and revelation,
Joseph Tkach

Note: all public domain pictures are via Wikimedia Commons.

[1] See the article at http://www.businessinsider.com/the-end-of-physics-as-we-know-it-2016-1. To watch the TED talk with Dr. Cliff referenced in the article, go to http://www.ted.com/talks/harry_cliff_have_we_reached_the_end_of_physics#t-705970.

[2] For more about the Higgs boson particle, go to https://en.wikipedia.org/wiki/Higgs_boson.

[3] For an explanation of the Higgs field, go to http://www.fnal.gov/pub/science/inquiring/questions/higgs_boson.html.

[4] See the referenced book at https://books.google.com/books?id=-v84Bp-LNNIC&printsec=frontcover&hl=en#v=onepage&q&f=false.

2 thoughts on “Why something rather than nothing?”