This past Sunday, October 20, I had the privilege to attend the launch service for Belong Church in College Park, Florida. Over the last 10 months, Howard Salter and his team have been taking the necessary steps to make the launch of the Church a reality. 83 people were in attendance, including nine children. The service was an awesome celebration of the good grace of our Triune God. 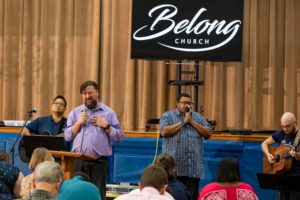 Howard and Becky grew up in the old WCG but when our theological transformation occurred, the Lord took them in a different direction. After participating in different Baptist churches, Howard felt the call to come back home to GCI. They made their way back through Grace Communion Orlando (GCO) where they already had a relationship with Pastor Steve Shantz. Pastor Shantz had married them back in the day and had stayed in touch with them throughout the years. Ish and Beatriz Beloso, and Felix and Mirelly Gaetan, from GCO joined Howard and Becky in the adventurous journey of starting a daughter Church. 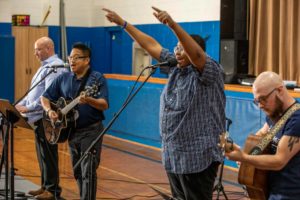 Howard shared how the Lord’s calling on his life to start a daughter church goes back to his wife’s (Becky) childhood. Becky and her family moved to College Park when Becky was a child. Her father was murdered in College Park in a botched robbery when Becky was just a nine-year-old girl. As Becky grew older, she also grew bitter at the person who took her father’s life. In short, the Lord did a wonderful work in Becky’s life, bringing her to the point of forgiveness and healing. When they moved back to Florida some 7 years ago, they could not get close to College Park. Becky would have panic attacks and was not able to cross the town. 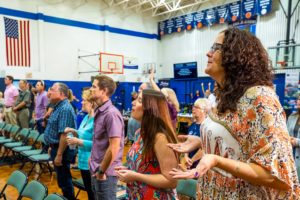 When Howard felt called to plant a congregation with GCI, he never envisioned starting the church in College Park. When he was initially exploring the different areas where he can connect with the age demographics that he felt called to, College Park was the community that was the best fit. The Lord continued to work in Becky’s heart, bringing her to the point of fully reconciling her past and comprehending that the residents of College Park belonged to the Lord, hence the name, “Belong Church.” She slowly warmed up to the idea of launching the church in her old town, and Sunday was a testament to the grace of God. 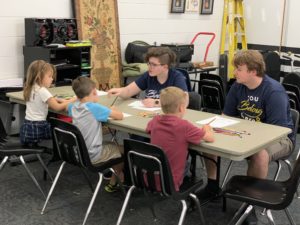 Four months ago, the Salters moved their family to College Park and started engaging their community. The Lord opened many doors for ministry, including a school across the street from their home where Belong Church now meets. GCI is catching the wave of the Spirit and joining Jesus in his everyday mission in our communities. Please join me in lifting up prayers of thanksgiving for the Salters and their team as they continue to missionally engage their neighbors in College Park.